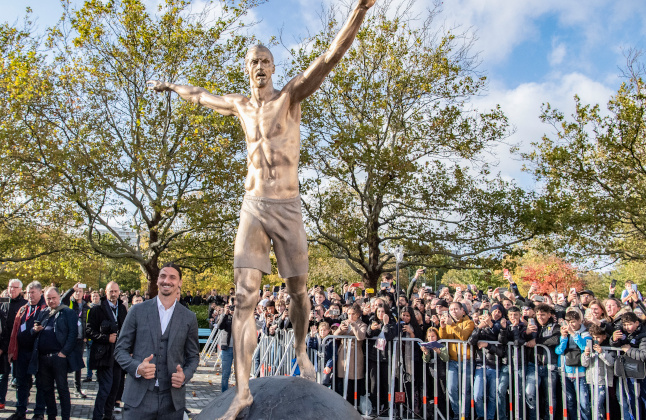 Zlatan Ibrahimovic and his statue in Malmö in happier times. Photo: Johan Nilsson/TT

Since announcing a month ago that he was buying a stake in the football club Hammarby IF, based in Sweden's capital Stockholm, Ibrahimovic's bronze statue in Malmö has been regularly vandalized.

It was only unveiled in October, in the presence of thousands of fans, outside the stadium of Malmö FF – the southern Swedish team where Ibrahimovic made his professional debut in 1999 and a rival of Hammarby.

A rope was placed around the statue's neck and the word “Judas” daubed across the front door of his residence in Stockholm.

“He's lost to Malmö, the relationship is over,” Kaveh Hosseinpour, vice-president of the Malmö FF supporter club, told AFP.

The star himself has yet to truly address the controversy, only saying that he “didn't see it”, when asked by celebrity news outlet TMZ.

The son of a Bosnian and a Croatian, Ibrahimovic, 38, grew up in Rosengård, a tough working class neighbourhood of Malmö with a high immigrant population.

Rosengård is where he kicked his first football, surrounded by decaying concrete buildings. It was also the place where his legend was first forged.

“Not a day goes by without a young man telling me he's the new Zlatan,” said Ivan Milosevic, who played alongside Ibrahimovic as a child at FBK Balkan, where he is now president.

Ibrahimovic turned out for many of Europe's top teams, such as Amsterdam's Ajax, AC Milan, Barcelona, Paris Saint-Germain and Manchester United, before he signed for US team LA Galaxy in 2018. As one of the best players of his generation, the footballer can be considered “a national public good” in Sweden, according to Johanna Frändén, a sports writer with daily newspaper Aftonbladet.

Among young people with immigrant backgrounds, Ibrahimovic has become even more of a symbol, as his cocky attitude, individualism and zealous ambition stand in stark contrast to cardinal values of humility and modesty still apparent in the traditionally Lutheran country.

With 116 games for Sweden and 62 goals, Ibrahimovic is the all-time leading scorer for the national team.

Previously, his fans have been ready to forgive almost everything the player has done, and vehemently defended his sometimes controversial statements.

But for many the investment in a rival club was simply too much to bear.

“We were very surprised” when he said he was acquiring a 25 percent stake in Hammarby, Frida Trollmyr, deputy mayor of Malmö in charge of culture and sport, admitted to AFP.

Ibrahimovic also had the audacity to say he intended to make Hammarby – whose lone Swedish title came in 2001 – the best club in Scandinavia. By comparison, Malmö are the record 20-time domestic champions. “Zlatan has received a lot of respect and love from Rosengård, Malmö and Malmö FF,” Katarzyne Herd, an ethnologist focusing on Swedish football clubs, said.

“But he has refused to pay it back with what his supporters were craving, which is loyalty,” she added.

Rakel Chukri, an editorial writer for the local newspaper Sydsvenskan, also said that his immigrant background means some people feel that his “debt of loyalty” to the city is even greater.

“Racial slurs are always close at hand when Zlatan is criticized because he is such a symbol for immigrants in Sweden,” said Frändén.

In one of the instances when his statue was defaced, the words “Cigani dö” (“gypsy” in South Slavic languages, and “die” in Swedish) had been written in front of the statue.

Even in his home neighbourhood of Rosengård his star has faded somewhat and the disenchantment can even be read on the concrete.

Over a tunnel, a few hundred metres from the house he grew up in, one of his quotes has been put up: “You can take a guy out of Rosengård. But you can't take Rosengård out of the guy.”

Recently an addition to the quote was made: “But the guy can buy his way out.”