From left: Alvaro, Yvonne, Monica and Helle: Panellists in the Movie Talk during the 16 days of activism against gender-based violence at Lund University.

While planning for activities around this event, the SI NGFL Lund board had several ideas to choose from. The first step was to check the UN website and see what was available in terms of campaign material and other resources which could be adapted and incorporated in our activities. The board agreed to have the kick-off event on 25th November and on 2nd December the Movie Talk.

The planning sessions involved several Skype and face-to-face meetings of the board members. There were several concerns: ‘What movie do we show?’, ‘Who will do the fika?’, ‘Who do we invite to the lecture?’, 'How long should the movie be?', ‘What is the most strategic position in Lund campus to hold the kick-off event?’ and so on. The whole idea was to reach out to fellow students in a fun, memorable, informative and interesting way that can bring self-reflection and enable discussions on the topic of gender-based violence.

‘Orange the World’ was the slogan of the campaign and we did our best to ‘orange up’ Lund University at the entrance to one of the campus buildings.

Alexei and Anne Stella (members of the board) talking to a group of students about 16 days of activism against gender-based violence on 25th November 2019.

A scholar having a moment of fun during the kick-off event with Maria and Bridgette from the board.

During this event several flyers were distributed, plus many other students scanned the QR code which redirected to the websites with more information about the general campaign and our local events around the 16 days of activism against gender-based violence.

Board members could afford a smile at the end of the successful kick-off event.

In the course of the 16 days, there was daily social media communication by the amazing marketing team: Maria and Alexei, who posted facts about rape, movies related to rape that students could watch and kept the campaign alive on social media.

A week later, it was time to convene again and have a more serious discussion about gender-based violence. The meeting started at 5pm at the international desk. After preliminaries and general introductions, professor Helle Rydström from the Department of Gender Studies at Lund University gave an informative, challenging and well-structured in-depth presentation of concepts, country data, research and current issues on the topic of gender-based violence. Monica Cabarcas shared her PhD research on gender-based violence in war situations.

Next it was movie time:

After watching the movie ‘A Thousand Girls Like Me’, the scholars shared that they felt a mix of emotions ranging from anger, pity, hopelessness and disbelief as they watched Khatera, a 23-year-old Afghani girl who had been habitually raped by her father and had two children by him. Her rape events happened at her home; the place she was meant to feel safest. Her family, including her mother, brothers; and even the neighbours and religious leaders in her community knew about it but were ‘silent’ until she was old enough to seek out justice for herself using the help of the media. The movie shows how the rape events disrupt the lives of the entire family and one of the most bitter moments in the movie is when Khatera helplessly expresses how her daughter is also her sister.

Katongo Seyuba says, “I was personally moved by the passion of SI scholars to work towards the success aimed at combating gender-based violence. We [men and boys] need to be actively engaged to ensure a society free from rape and other forms of gender-based violence. As men, we need a mindset change to break the traditional patriarchal customs that disadvantage women. Gender-based violence is a fight that men and women must win together!”

The board has received plenty of great feedback following this event. The best is being featured on UN Women Nordic Twitter account. One of our key roles as global leaders is to give support to existing efforts towards SDGs so this was welcome news. Secondly, the news from Alexandra, who is a student at Lund University who said she received inspiration to write her term paper on gender-based violence after attending this event. Awesome news! Finally, the planning of these events related to gender-based violence have led to networking of professionals and students in the field and to potential research collaborations!

“Bearing in mind that SDG 5: ‘to achieve gender equality and empower all women and girls’ is intertwined and linked with the successes of the other SDGs, it was pure joy to put together efforts towards ensuring the success of the events around the 16 days of activism against gender-based violence. Efforts of girls and women empowerment are more effective when programs and interventions find a way to personalise the messages to both men and women with the aim of winning more allies. The SI-NGFL Lund events of the 16 days brought about constructive dialogue and self-reflection in interesting and effective ways.” 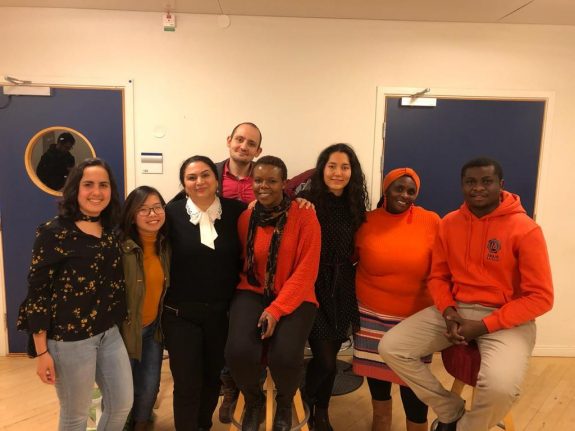 SINEWS
Team work ‘needs to be embraced’ in Sweden
Url copied to clipboard!