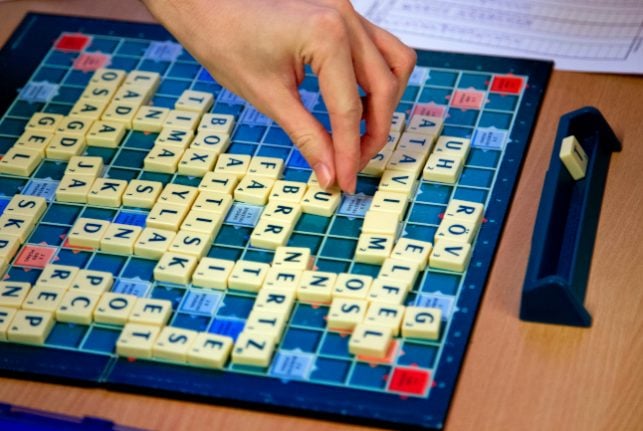 Perhaps you can use one of these words in your next game of Scrabble. Photo: Adam Ihse/TT

The list is put together each year by some of Sweden's top linguists at the Swedish Language Council and language-related magazine Språktidningen. It is called “the new word list” but it focuses on words that became part of the daily conversation that year – not necessarily words that are completely brand new.

This year, 35 new words made the list, with many linked to the climate and environment. The Local has picked out 10 words that we think help explain Sweden in 2019, and translated them into English below.

What was all that fluff that blanketed Stockholm and other parts of Sweden back in May? It was aspludd, or what one biologist referred to as “God's belly button fluff”, and it became a major talking point in spring.

Here's the article The Local wrote about this phenomenon when it happened – do you remember?

Ever wondered how to say fuck-off fund – the cash reserve you can use to for example quit your job, leave a cheating partner, walk out the door without having to stop to worry about money – in Swedish?

Dra åt helvete-kapital, that's how. It directly translates as 'go to hell capital'.

Has Swedish teenage climate campaigner Greta Thunberg inspired a more environmentally-friendly behaviour in Sweden and beyond? If she has, that's known as gretaeffekten – the Greta effect.

Many of the words on this year's list are climate-related, and klimatstrejk is no exception. In fact, Collins Dictionary even named 'climate strike' the word of the year. We guess that's the Greta effect in action.

Flygskam, or flight shame – being ashamed of or avoiding flying because of the impact on the climate – was on last year's list of new Swedish words, and it spread globally in 2019.

Now, sometimes you'll fly anyway, whether it's because you have to or because you've survived the winter in Sweden so you feel like you've really earned a break in sunnier climes.

But instead of telling everyone and posting a triumphant picture of your departure on social media, you may choose to keep it quiet and smygflyga (which awkwardly translates as sneak fly or stealth fly).

Ok, so you were strong enough to resist the smygflyga temptation and there you are on Instagram on your 12-hour train from Sweden to southern Europe. Just go ahead and tågskryta (train brag), why don't you.

Benim is the genitive case of Turkish pronoun ben and means my or mine. It is also often used as an exclamation, for example if you enter someone's home and announce “It's me!” – it is probably this meaning of the word that has made it into Swedish. So far, it is mainly heard in rap lyrics or in street slang.

Imports of halloumi increased in Sweden from 21 tonnes in 2010 to 4,000 tonnes last year, as it became the barbecue meat substitute of choice for many Swedes. But this summer warnings emerged about antibiotics given to farm animals in Cyprus, much to the discontent of Cypriot organizations, and halloumi fell out of fashion. Its Swedish-made substitute is called eldost (fire cheese) and is now growing fast in popularity. Källkritik (source criticism) is a well-known Swedish word, but this year there has also been a lot of talk about the importance of källtillit (source trust) – how to use source criticism to be able to know which sources to trust, where to find reliable data and how newspapers work to verify reports.

Menskonst means period art (as in menstrual period) and has existed in the Swedish language since 2014.

For example, in 2017 artist Liv Strömquist caused a stir with a painting of women having their period which was shown at the Slussen metro station in Stockholm.

But this year it became increasingly popular to use the term in a broader sense to denote all art that in the eye of the beholder is deemed “too” radical, feminist or edgy, as opposed to something with wider appeal.

Here's the full list of this year's 35 new words (in Swedish).