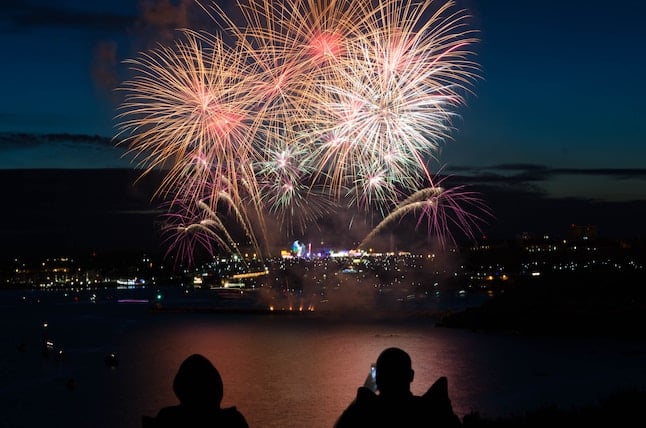 How to spend your spring, summer, autumn and winter in Sweden. Photo: Chris Gilbert/Unsplash

Winter time in Sweden is ice hockey time. The competitions are a spectacle to experience; the puck reaches speeds of between 140 and 160 kilometers per hour, so you have to watch carefully to be able to follow the game.

Every city in Sweden has its own club and stadium. Stockholm's ice hockey clubs are Djurgårdens IF and AIK, Gothenburg has the Frölunda HC and the Malmö club is the Malmö Redhawks. The winter month of February is an excellent opportunity to head north. In Swedish Lapland you'll experience the winter as in no other place.

One of the best experiences is taking a trip with sled dogs. The incredible tranquility and beautiful nature will stay with you for a long time.

You have to use any excuse to eat a waffle, right? Waffle Day (Våffeldagen) is celebrated every year on March 25th in Sweden, so you can eat them all day. Waffles are a popular treat all year round but especially in springtime; they're served in cafes and restaurants, or you can make them yourself at home. A typical Swedish waffle has Swedish sylt (jam) and whipped cream as toppings.

READ ALSO: Waffling on – a tradition of mispronunciation

Spring is in the air! Easter in Sweden is the moment to celebrate the beginning of spring and as with almost all other holidays in Sweden, food plays an important role. A typical Easter menu might include cardamom muffins, pickled herring and cured salmon. And of course there is påskmust, a soft drink that looks (and tastes) suspiciously like the Christmas variety julmust. Among nature lovers, Sweden is known for its right of public access (allemansrätten). This law prescribes that everyone may spend the night in nature, as long as he or she respects the rules and the environment. Walking a long-distance path through Swedish nature is therefore a fantastic experience in the summer. The best known route is Kungsleden, a 400-kilometre long hiking trail in Abisko National Park in the far north of Sweden.

June is the month of Midsummer in Sweden, one of the largest and most important traditions in Scandinavia. It is the day when the sun is in the sky the longest and the night is the shortest; in the northern parts of the country, the sun doesn't set at all. In 2020 the festival falls on June 20th. This day is all about celebrating the summer, flowery decorations and delicious Nordic food. There are public festivities throughout the country that you can join.

With its 3218 kilometres of coastline and 95,700 lakes, there is always a place nearby for a refreshing outdoor dip in Sweden. July is the hottest month in Sweden, and swimming is therefore a favourite use of time during this period. In the south and east of Sweden you will find a number of beautiful sandy beaches, smooth rocky beaches on the west coast, and even several great places to jump into the water in Stockholm. Be warned, if you don't like strong smells you'd better skip this. Every third Thursday in August it is the traditional day of the surströmming, or fermented sour herring. Many give up when they smell the fish, but for some it is a real delicacy. The fish is caught in the Baltic Sea in the spring and is then fermented and canned using a specific method. Bon appetit!

One of the things that stand out during a visit to a Scandinavian city is the presence of amusement parks close to the centre. In Stockholm you will find Tivoli Gröna Lund on the leafy island of Djurgården. This amusement park was founded in 1883 and has 30 attractions, including six roller coasters. The high swing ride is easy to see from other parts of the city. September is the last month Tivoli Gröna Lund is open regularly while Gothenburg's Liseberg amusement park is open all year round but September is a great time to visit after the crowds of the school holidays when the days are still long. Autumn is a beautiful time to observe Sweden's changing nature. Green slowly gives way to the typical brown, red and yellow colors of autumn. Take a walk through the parks at Djurgården in Stockholm, the beautiful Kungsparken in Gothenburg or head into nature towards one of the national parks in Sweden. Soon, autumn will make way for the dark Scandinavian winter.

READ ALSO: Essential Swedish: How to talk about the weather with the locals

From November 11th-21st, 2020, Stockholm Film Festival will take over Stockholm's cinemas and show around 150 films from over 60 countries. In addition to the screening of different films, the 'Bronze Horse' for the best film will also be awarded and there will be all kinds of workshops. A special edition for children is also being organized. A perfect event to be surprised by new upcoming films and emerging directors.

December: It's all about Christmas

You can't get away from it: December is the month of Christmas. Swedish town and cities are lit up with thousands of lights, sweet Christmas music is heard everywhere and there is plenty of food and shopping. Christmas in Sweden is a special time full of old traditions that start with the advent, four Sundays before Christmas. Highlights are Lucia Day on December 13th and of course Christmas Eve.