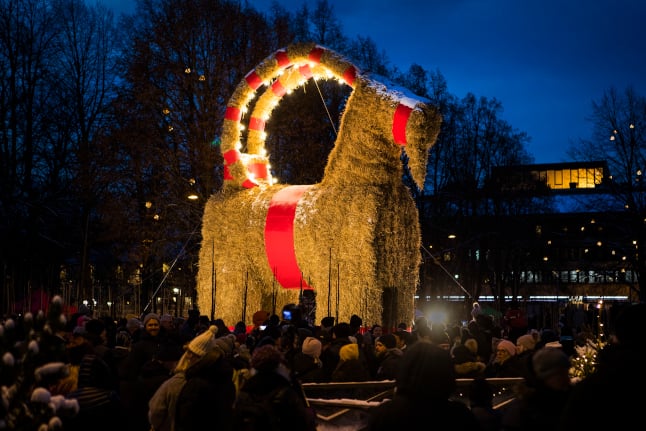 The giant straw goat in the town of Gävle. Photo: Mats Åstrand/TT

The town of Gävle on the east coast of Sweden has built the straw goat every Christmas since 1966. But more often than not it meets an untimely demise when it is burned down, stolen or vandalized.

On its 50th anniversary it got torched only hours after the official opening when one of the security guards went on a toilet break. Some of the more outrageous attempts on its life has included a failed helicopter plot and a gingerbread man and Santa Claus wielding a bow and burning arrow.

It's fair to say that the drama of its fate is at least as big a draw as the goat itself, to the extent that Swedish and international bookmakers offer odds on the goat surviving the season. You can even watch the goat live here.

But this season the 13-metre straw beast has a record-breaking reason to be jolly. It made it through both Christmas and New Year’s Eve unharmed – the first time it has survived three years in a row.

So when I'm all choked up
But I can't find the words
Every time we say goodbye
Baby, it hurts
When the sun goes down
And the livestream won't play
always remember me this way#illbebock #overandout #imasurvivor #untilwemeetagain pic.twitter.com/0zFYiJ3B73

That, of course, does not mean that its fans will not have to bid the goat farewell.

The goat was being dismantled by the official organizers on Thursday. Its frame will be used to build the 2020 incarnation and the straw will get burned at the local heating plant in Gävle.