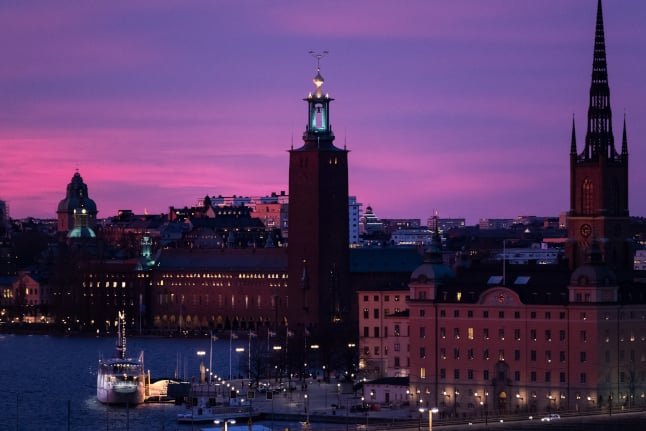 The sun sets on Stockholm City Hall on the first day of 2020. Photo: Stina Stjernkvist/TT

It looked like the sky was on fire when the sun set at 2.58pm in Stockholm on January 1st (for comparison, it set an hour earlier in Umeå in northern Sweden and almost a whole hour later in Malmö in the south).

But what causes the spectacular red colours we see during a sunset? A propeller aircraft in the skies above Stockholm on Wednesday evening. Photo: Stina Stjernkvist/TT

Well, during the day, the colours of the sun are scattered as they travel through the atmosphere to earth. Blue light, because of its shorter wavelength, gets scattered more widely. This is why the sky is blue (it's mostly been covered in clouds this winter in Sweden, so you'll just have to take our word for that). The Local's reader Seren Dincel took this picture of the sunset in Stockholm. Photo: Seren Dincel

But when the sun is low on the horizon the closer to setting it gets, the light has to travel further and through more air. This means the sun's blue light gets scattered even more and disappears almost completely, with only the red and yellow hues, with longer wavelength components, remaining. Vivek Rao sent in this picture of the sunset in Stockholm. Photo: Vivek Rao

In general, how red the sunset gets depends on a variety of factors, including how many particles there are in the air and humidity levels. Even a volcanic eruption in another country can produce sulfuric acid clouds in the stratosphere which can cause brilliant sunsets around the world. If the sun manages to shine through and light up the clouds from underneath, the sunset may be even more beautiful and intense, explained public broadcaster SVT's meteorologist Per Stenborg on Thursday.

The Local's reader Hamit Driza sent us this picture of the sunset. Photo: Hamit Driza

Saharan dust has been moving through the air in Europe over the Christmas holidays, causing extraordinary sunsets in for example the United Kingdom, which may have increased the amount of particles in the air and contributed to the dazzling phenomenon in Sweden on New Year's Day. The ferry to the island Djurgården in central Stockholm. Photo: Stina Stjernkvist/TT