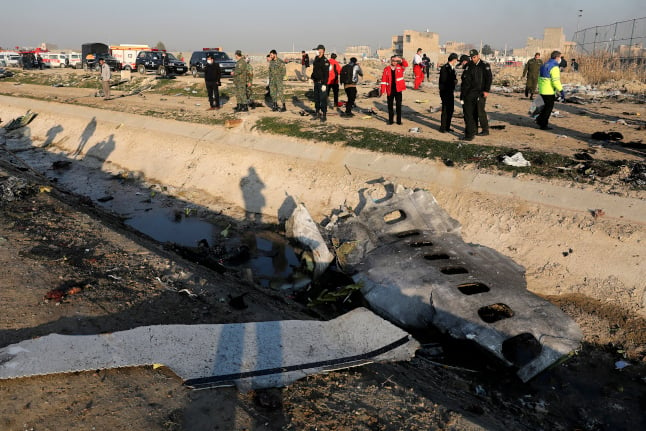 The plane crashed south-west of Tehran, killing all on board. Photo: AP Photo/Ebrahim Noroozi

The passenger plane – a Boeing 737-800 operated by Ukrainian International Airlines and said to be carrying around 170 people – went down less than ten minutes after taking off from Imam Khomeini international airport at 6.12am Tehran time, according to international media reports.

“A number of Swedes have been killed in the aircraft crash in Iran,” a spokesperson at the Swedish foreign ministry confirmed to The Local at noon.

“We are now working intensively to obtain clarity about the number of Swedes who have died. We are doing this onsite in Iran, through our embassy, and at the Ministry of Foreign Affairs in Stockholm. Ukrainian authorities have informed us that at least ten Swedish citizens were on board.”

The foreign ministry urged Swedes in Iran to contact their relatives, and asked worried relatives to call the ministry on +46 (0)8 405 92 00. “In such situations, it is important for us to inform relatives before publicly confirming fatalities, and we ask for understanding for this,” added the spokesperson.

Swedish police have set up a crisis centre for families worried about their loved ones at Clarion Hotel Arlanda.

At least two children from the Stockholm area are believed to be among the dead, according to the airline's passenger lists.

Vadym Prystaiko, the foreign minister of Ukraine, said on Twitter earlier on Wednesday that known passengers included 82 from Iran, 63 from Canada, ten from Sweden, four from Afghanistan, three from Germany and three from the United Kingdom, as well as two passengers and nine crew from Ukraine.

“Our deepest condolences, which I have also conveyed personally to Ukraine's Foreign Minister Vadym Prystaiko, on the tragic plane accident in Tehran. Our thoughts are with the victims and their loved ones,” tweeted Swedish Foreign Minister Ann Linde.

PS752 was operated by a 737-800 (not a MAX) registered UR-PSR. Delivered new to Ukraine International Airlines in 2016. pic.twitter.com/eMhnBtpQP6

According to Flightradar, the aircraft was delivered new to the airline in 2016 and is powered by two CFM56 engines. A video shared by Iranian state-run news agency Isna claimed to show it burning as it fell from the sky.

“The plane crashed five minutes after taking off,” The Guardian quoted Iranian civil aviation spokesperson Reza Jafarzadeh as saying. “The pilot had no contact with the tower and didn't announce an emergency situation before the crash.”

The crash is not believed to be linked to terrorism or a rocket attack, CNN quoted the Ukrainian embassy in Iran as saying, citing preliminary information. But Ukraine's government later issued statements saying it was too early to comment on the cause of the crash.