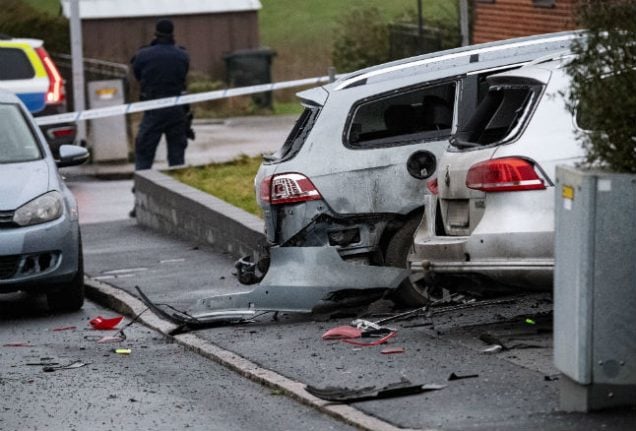 Two cars sustained heavy damage during Sunday's blast. Photo: Johan Nilsson / TT
The blast, which took place at around 4.30am, damaged two cars and a house, but did not injure anyone living in the areas.
“We are still investigating what might have caused the explosion and we need to carry out a comprehensive forensic analysis before we can say anything on that issue,” the police's press spokesperson Katarina Rusin said.
“There were people inside the nearby house at the time of the event, but fortunately none of them were injured.”
The blast brings an end to a week where the ongoing wave of bomb attacks in Sweden returned, with a twin blast in the Stockholm suburb of Husby and a small blast in Malmö on Tuesday, and another in the city of Norrköping on Wednesday.
According to the Helsingborgs Dagblad newspaper, the explosion was the second in the same area in less than two months and the 10th to take place since the summer.
New statistics released earlier this month by the Swedish National Council for Crime Prevention showed that there were no fewer than 257 crimes registered by police in 2019 related to bomb attacks, a 60 percent increase on 2018.
But Mattias Sigfridsson, deputy chief of Malmö police told The Local last week that 257 crimes did not mean there had been 257 actual explosions.
“If we file a complaint against someone who’s been trying to organise an explosion, then that is recorded: those figures aren’t explosions that have occurred. In many cases, it’s because of our proactive prevention.”
So while the number of crimes recorded involving explosives nearly doubled in the police's Southern Sweden region last year compared to 2018, the number of actual blasts fell to 36, down 38% on the city's 2017 peak.