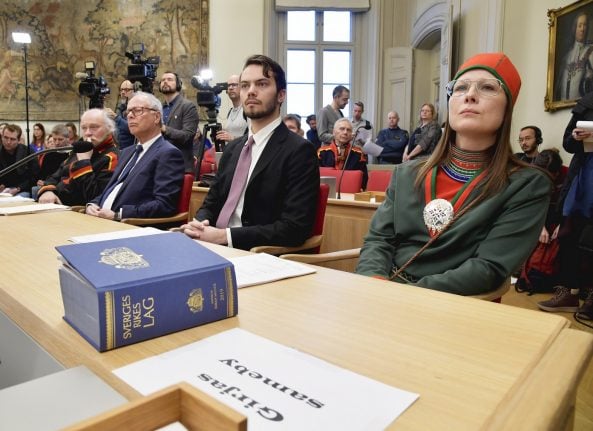 The court case was a landmark ruling for Sami rights. Photo: Anders Wiklund/TT

Several police reports have so far been filed regarding threats and hate towards members of the plaintiff in the landmark case, Girjas Sami village, and members of a neighbouring village, Baste.

“There's a lot of hatred and an aggressive mood,” the chief of the police investigation, Emma Lindberg, told The Local.

A Sami village is not a village in the most common sense, but rather an administrative community linked to a larger geographical area, in which the members have the right to herd reindeer – and in some areas the right to hunt and fish – regulated by the Swedish Reindeer Husbandry Act. There are 51 in total in Sweden.

“If you come here with your reindeers we will shoot them, I've already shot seven. And if I come upon you alone in the forest I'll shoot you too!” a man reportedly told Lars-Ola Jannok, the head of Baste Sami village, while he was releasing his reindeers outside of Gällivare municipality on Monday morning. The threats started coming in after Girjas Sami village won a ten-year court battle that granted them the exclusive right to determine who could hunt and fish in their area. This right had been revoked by the Swedish state in 1993 in a contested land reform.

Several of the threats were on online forums, in particular the message app Jodel, where users are anonymous. “You are selfish disgusting fuckers, I hope you realize that you have started a war now,” one of the comments said, according to TT.

“We are still in an early investigative stage, right now we are trying to classify the different cases, securing evidence and holding interrogations,” police investigator Lindberg told The Local.

“The investigations we currently have are varied, they concern unlawful threats, abuse, agitation towards ethnic group and inciting violence,” she added. According to Lindberg, the main challenges for investigators are, firstly, to assess which comments are classed as illegal according to prevailing law.

“What is written and said, and the boundaries for what is allowed or not are shifting with current public discourse, so it is in part a judicial challenge to ascertain what is considered a crime, or not.”

The second challenge is technical. She said that they need to be able to secure evidence from different online forums, each with their own difficulties.

“Lastly it's the issue of, when you have a hate crime, you need to investigate and prove motive. Because the classification 'hate crime' means that the crime has been done with intent to offend, in this case, an ethnic group,” Lindberg explained.

Hate towards the Sami in Sweden

Both disagreements over land rights and outright abuse toward the Swedish indigenous peoples have been commonplace throughout Swedish history.

Forced relocations as well as conflicts about mining rights are among the many issues that the Swedish government has been criticized for in regards to the Sami.

In 1922, Sweden became the first country in the world to establish a National Institute of Racial Biology, which was created after a unanimous political decision with support from all political parties. It was instituted on a basis of so-called 'racial purity' and for decades was the proponent of Swedish eugenics and policies including forced sterilization of certain groups until its closure in the 1950s.

Today, many Sami people still report experiences of discrimination and 'everyday racism', including in social media and online forums. From the exhibition “(In)human”, about racial biologists and skull-measuring in the first half of the 20th century. Photo: Johan Engman/TT

OPINION: Why is what happened to the Sami in Sweden not common knowledge?