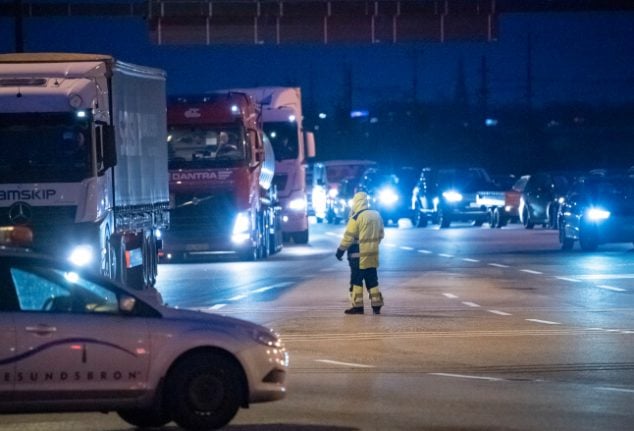 Winds of over 97 km/h forced the bridge between Sweden and Denmark to close. Photo: Johan Nilsson/TT

Snow fell in non-coastal areas of the southern Götaland region, with trucks being forced to pull to a standstill west of Alvesta and a toppled-over tree blocking the road between Lagan and Vittaryd.

Around 5,700 households in Malmö were plunged into darkness after a power blackout on Tuesday evening. The problem was resolved by 2am on Wednesday, according to electricity provider Eon.

The Öresund Bridge between Sweden and Denmark closed for all cars, buses and trucks for around four hours on Tuesday due to harsh winds.

And the rain, wind and snow could continue until Thursday, said weather agency SMHI.

Snow was forecast for southern Stockholm and the Södermanland region on Wednesday, after snow fell in the Uppsala area north of Stockholm on Tuesday evening.

Sweden's east coast, from Kalmar in the south up to southern Stockholm, was also told to brace for strong gusts of wind.

Northern Sweden, on the other hand, was set for a sunny winter day with temperatures ranging from -5C to -10C.