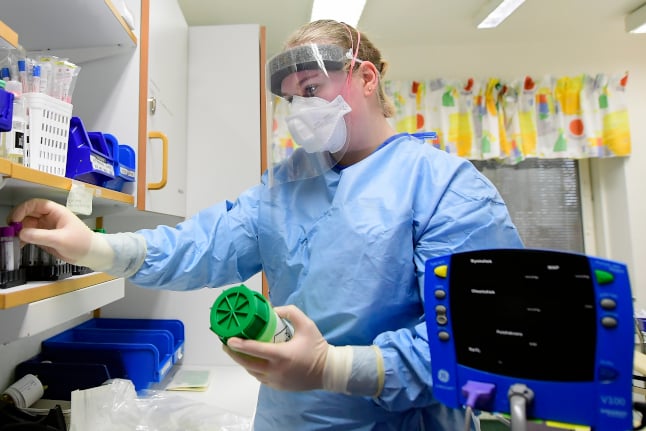 File photo of an infectious disease doctor in Sweden. Photo: Mikael Fritzon/TT
Editor's note: The situation around the novel coronavirus is changing rapidly, and this article is no longer being updated. Please click HERE for the latest updates and HERE for all our coronavirus coverage.
The five new patients are: One person in the Stockholm healthcare region, a woman in the Uppsala region and three people in Västra Götaland, according to Sweden's Public Health Agency (Folkhälsomyndigheten).

Two of the patients in Västra Götaland had been in close contact with a Gothenburg-based man in his 30s who tested positive for the coronavirus, or COVID-19 as it is also known, on Wednesday after returning home from Italy. The third person also contracted the virus on a visit to northern Italy.

All three are in their 30s, said Swedish health officials at a press conference on Thursday evening.

The patient in Uppsala was exposed to the virus on a trip to Germany and sought treatment in Sweden after developing symptoms similar to a respiratory infection. Uppsala health officials confirmed that she was feeling well. It is not immediately known how many people she has been in contact with in Sweden.

The Stockholm patient was infected in Iran, and is being kept in isolation at the Karolinska University Hospital in Huddinge. She is described as a middle-aged woman who returned to Sweden around a week ago, at which point she did not have any symptoms, and fell ill three days ago. She is not believed to have been contagious on the plane home from Iran, and is only said to have been in contact with a few people.

She is doing well under the circumstances, according to health officials.

The two people in Västra Götaland who were infected after being in close contact with the man in Gothenburg are the first two cases of the virus spreading from one person to another in Sweden. They were both discovered after health officials actively contacted people who had been in contact with the man.

While health authorities believe that the risk of more cases being detected in Sweden is “high” (this is unchanged since Tuesday), there is not believed to be any imminent danger of a widespread outbreak.

“It was expected that we would get new cases of infection in Sweden. So far all the cases of COVID-19 are linked to travellers, directly or indirectly through close contact with an infected person, and we are not currently seeing any general spread of infection in society,” said Britta Björklund, a departmental head at the Public Health Agency, in a statement on Thursday.

Sweden's first case of the coronavirus was reported in Jönköping at the end of January. At the start of February, authorities said the woman was “feeling well” and that they expected her to make a full recovery.

Swedish health authorities are currently urging anyone who has been travelling in China, South Korea, Iran or northern Italy to stay at home if they develop symptoms, and call health services at 1177.

More than 650 people have tested positive for the virus in Italy as of Thursday, but the EU stressed on Wednesday that the outbreak of the novel coronavirus in Europe was concerning but no reason for alarm.

There have been more than 80,000 confirmed cases and more than 2,800 deaths worldwide since the virus first broke out in the Chinese city of Wuhan in December.

It is important to remember that the vast majority of people recover.

According to the World Health Organisation some 80 percent of those infected will only suffer mild symptoms. Some five percent end up in a critical condition.

Older people and those with underlying medical problems like high blood pressure, heart problems or diabetes, are more likely to develop serious illness.

The coronavirus is primarily spread through airborne contact or contact with contaminated objects, and the symptoms include a cough, headache, fatigue, fever, aching and difficulty breathing.

If you think you have the illness, do not go to hospital or your doctor's surgery. Swedish health authorities are worried about potentially infected people turning up at hospitals and passing on the virus. Instead, call Sweden's national health advice hotline 1177. Here's a general article about how the Swedish healthcare system works.

Hello,
The Local's mission is to give our readers the information they need to navigate their lives in new countries. We rely on paying members to do that, but we have chosen not to put any of our articles about the coronavirus behind our hard paywall, to help the public and counter the spread of misinformation. We believe it is the right thing to do.
This means that new or occasional readers can read articles such as this one for free. On urgent need-to-know updates about the virus, we will also drop the paywall completely.
We have had a few questions from readers this week if there is a way you can donate to The Local, rather than subscribe. There isn't an easy setup for this right now, unfortunately.
The best way is simply to sign up for membership here and cancel later. Unlike many others, we make it easy to cancel, without any annoying back-and-forth phone calls. Alternatively, if you want to donate but still really don't want to join as a member, PayPal to [email protected].
We hope our paying members understand why we have chosen to make these articles about the coronavirus free for everyone, but if you have any questions, please let me know.
As for the coronavirus, you can read all our articles here.
All the best,
Emma
Editor, The Local Sweden