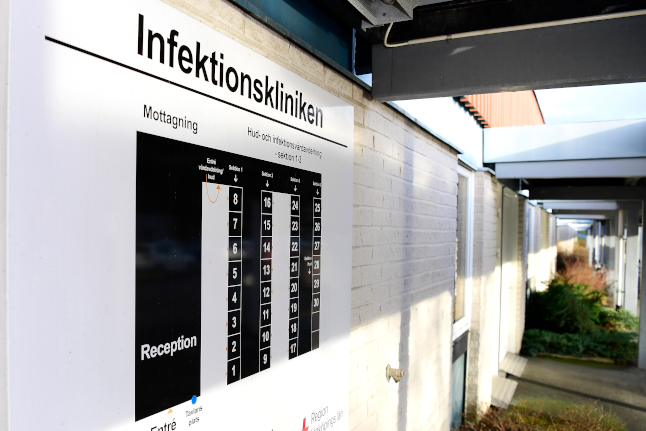 The woman, who is in her 20s, contracted the virus also known as COVID-19, on a trip to Wuhan in China. After returning to Sweden she developed symptoms and contacted health services, who said at the time that she had acted in an “exemplary” way for self-isolating as soon as she began to feel unwell to avoid infecting others.

“The patient is in principle completely recovered and healthy,” deputy infectious disease doctor David Edenvik told The Local on Tuesday.

He added, however, that Sweden Public Health Agency's official criteria for recovery are very strict, so while she is not formally registered as recovered in Sweden's coronavirus statistics, she is out of the woods.

“Because this is a new kind of infection we are very keen to collect as much data as possible, so the follow-up of these people is quite long,” he said.

Her symptoms were mild to begin with, as is the case for another two patients in the same region who were later infected on a trip to Italy. One of them has been discharged from hospital, and the other has been able to remain at home. Their symptoms have mainly been limited to mild respiratory symptoms and a dry cough.

The number of coronavirus patients in Sweden rose to 24 on Tuesday, as more cases were confirmed in Stockholm, Västra Götaland, Jönköping and Skåne. There have been no reports of any patients being seriously ill in Sweden so far, unlike in some other countries where people have died from the virus.

Even globally however, the vast majority of patients do recover, and according to the World Health Organisation around 80 percent experience only mild symptoms.

For patient confidentiality reasons, not all regional health authorities would confirm the patients' general health status when approached by The Local.

But while declining to comment on individual patients, Mikael Köhler, health director of Region Uppsala, said: “The general picture in Sweden, and now I'm saying what you know as well, is that people aren't that sick – but I can't speak (about) our cases.”

More than 1,000 people have undergone testing for the virus in Sweden, but all other tests have come back negative. Everyone who has tested positive so far contracted the virus either on trips to Italy, Iran, China or Germany, or they were discovered via active tracking of people those patients may have been in contact with.

This table shows how all the patients link together:

Sweden has focused on testing only people who have either had contact with people confirmed to have the virus, or who have recently travelled to affected regions and are showing symptoms.

That's in contrast to Italy, for example, which has carried out over 21,000 swab tests because the country has been unable to identify a “patient zero” at the beginning of the outbreak, making it difficult to trace people who may have been infected.

The risk of the virus spreading in Sweden was upgraded from “very low” to “low” on February 25th, and then to “moderate” on March 2nd, following developments in Italy as well as Iran and South Korea, the three countries with the highest rates of the virus outside China.

Authorities are preparing for further individual cases of people contracting the disease abroad and then returning to Sweden, and the risk of this is judged to be “very high”. This is the highest level on the same five-point scale and was upgraded from “high” on March 2nd.

Groups such as elderly people or those with other illnesses are thought to be especially at risk. In other cases, Sweden's official advice is to continue living as normal – taking only the precautions you would during normal flu season such as washing your hands regularly. If you return to Sweden from an area affected by an outbreak and start to experience symptoms, you should stay at home and call the national healthline at 1177.

The initial symptoms are not dissimilar to the common cold and include a cough, headache, fatigue, fever, aching and difficulty breathing, but if you get more seriously ill it may affect your lungs. It is primarily spread through airborne contact and its incubation period is two to 14 days, with an average of seven days.

Reporting by Emma Löfgren and Elias Liljeström
!function(){“use strict”;window.addEventListener(“message”,function(a){if(void 0!==a.data[“datawrapper-height”])for(var e in a.data[“datawrapper-height”]){var t=document.getElementById(“datawrapper-chart-“+e)||document.querySelector(“iframe[src*='”+e+”‘]”);t&&(t.style.height=a.data[“datawrapper-height”][e]+”px”)}})}();
***
Hello,
The Local's mission is to give our readers the information they need to navigate their lives in new countries. We rely on paying members to do that, but we have chosen not to put any of our articles about the coronavirus behind our hard paywall, to help inform all our readers. We believe it is the right thing to do.
This means that new or occasional readers can read articles for free. That includes this article. On urgent need-to-know articles and official advice about the virus, we are also dropping the paywall completely.
We have received many comments from supportive readers asking how can they contribute. The best way is simply to sign up as a member. You can do that in just a few moments by clicking HERE.
We hope our paying members understand why we have chosen to make these articles about the coronavirus free for everyone, but if you have any questions, please let me know.
As for the coronavirus, you can read all our articles here.
All the best,
Emma
Editor, The Local Sweden