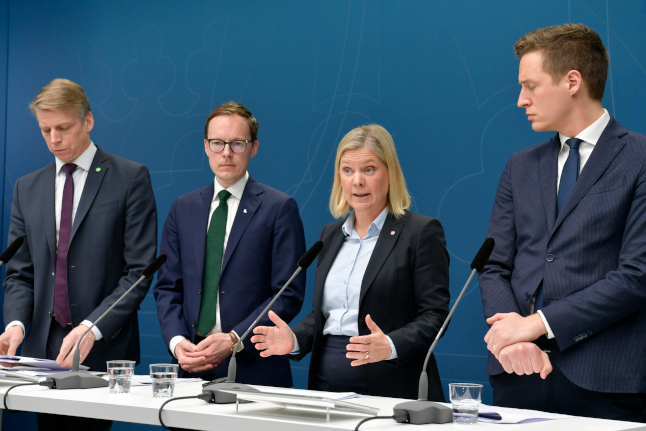 The decision means that workers will get sickness benefits from the moment they have to be absent from work due to illness, and the state rather than employers will foot the bill for the cost of the first day.

It comes into effect today, and will apply for one and a half month for now.

Swedish law normally guarantees sick pay from the second day of illness, but concerns had been raised that employees would turn up at work despite feeling ill in order not to lose out on the first day's salary.

Under the temporary rules, all employees will receive 700 kronor before tax on the first day of sickness while all self-employed people will receive 804 kronor before tax, regardless of their salary, whereas usually sick pay is 80 percent of the usual salary. For comparison, 80 percent of a monthly salary of 30,000 kronor would work out as about 1,500 kronor per day, so the payment for the first day will still be considerably less than typical sick pay for many workers.

Sweden's Public Health Agency has urged people to stay at home if they develop symptoms of the coronavirus, however mild, and especially not go to work if they come into contact with risk groups.

Social Democrat Finance Minister Magdalena Andersson announced the decision at a joint press conference with coalition partners the Green Party, as well as the Centre Party and Liberals.

She said businesses would also be allowed to defer two months' worth of employer contributions (arbetsgivaravgift) and employees' preliminary tax (preliminärskatt) for up to a year.

Meanwhile, several companies have encouraged even healthy employees to work from home in order to reduce the risk of spreading the virus, or at least contribute to delaying its spread.

The four parties are putting forward a spring budget which will also include a proposal for short-time work, that makes it easier for companies to let staff work fewer hours instead of having to lay them off in times of crisis. That decision has been fast-tracked due to the coronavirus and will come into effect on May 1st.

The state will also step in and inject a one billion kronor cash boost into municipalities and regions who need to take extraordinary measures due to the coronavirus.

Sweden's eight parties in parliament met on Wednesday morning to discuss how to handle the spread of the coronavirus, after the Public Health Agency on Tuesday raised the risk of it spreading to “very high”.

The opposition parties offered unusually mild criticism of the government after the meeting, calling only for faster action and leadership, but did not immediately openly disagree with any policies taken thus far.

“My impression is not that the parties disagree about the fact that the spread of infection must be fought at all costs. However, faster decisions were called for. There are slightly too many people coordinating and collaborating at the moment, and slightly too few making decisions,” Ulf Kristersson, leader of the conservative Moderate Party, told Swedish news agency TT on Wednesday.

Sweden has been criticised for not banning large public gatherings, which has been done in for example France and Switzerland. But the government has said it is prepared to make “fast decisions” if necessary.

According to Swedish rules, this can only be done if the Public Health Agency requests it. The agency said it is not strictly necessary at this stage, but added an announcement could be made late on Wednesday.

“It is complicated to puzzle together the legislation and the medical and epidemiological situation we're having,” Public Health Agency epidemiologist Anders Tegnell told reporters at a press conference.

More than 400 people have been diagnosed with the coronavirus in Sweden as of March 11th. The vast majority contracted it in Italy or via contact with patients who got it in Italy, but there has also been a handful of unexplained infections that may be the first signs of so-called community infection within Sweden.

Two patients were in intensive care on Tuesday, according to Stockholm health authorities, but most patients have experienced only mild symptoms with many being so well they're able to remain at home.