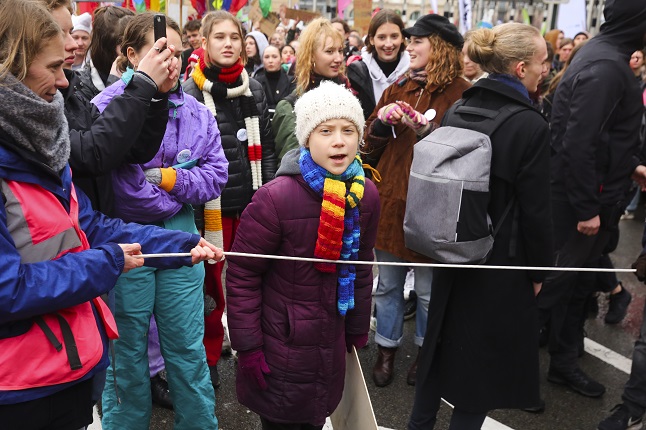 She said her “Fridays for Future” movement would organise online strikes instead.

The Swedish activist warned her followers it was vital they listened to the advice of health experts who have advised people to avoid large public gatherings to slow down the spread of the virus which has infected more than 125,000 people worldwide.

The Swedish government on Wednesday announced a ban on large gatherings of over 500 people.

We can’t solve a crisis without treating it as a crisis and we must unite behind experts and science.
This of course goes for all crises.

Now the experts urge us to avoid big public gatherings for a better chance to #flattenthecurve and slow the spreading of the Coronavirus. 1/4 pic.twitter.com/24o3a7J9ed

“We young people are the least affected by this virus but it's essential that we act in solidarity with the most vulnerable and that we act in the best interest of our common society,” she said on Twitter on Wednesday.

“The climate and ecological crisis is the biggest crisis humanity has ever faced but for now (of course depending on where you live) we'll have to find new ways to create public awareness & advocate for change that don't involve too big crowds.”

The 17-year-old Thunberg has inspired millions of young people around the world by spearheading a movement since 2018 to demonstrate on Fridays in frustration at government efforts to tackle climate change.

She has now urged activists to “join the #DigitalStrike for upcoming Fridays — post a photo of you striking with a sign and use the hashtag #ClimateStrikeOnline ! #fridaysforfuture #climatestrike #schoolstrike4climate”.

“So keep your numbers low but your spirits high,” she said.

LATEST ON THE CORONAVIRUS IN SWEDEN: