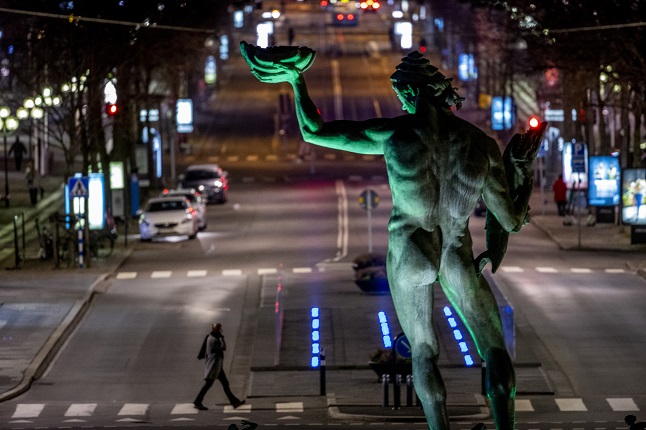 'Forced to stay overseas after a family death'

Eva is a Spanish woman who lives in Stockholm, working remotely and sometimes flying to the US. In late January, she travelled to Granada to look after her mother, who had been hospitalised and sadly passed away in early March.

The family tragedy came at the same time as the impact of the coronavirus became increasingly severe in Europe and the world.

“I see myself de facto forced to stay in Spain for an indefinite time. I won't be able to visit the US for work for the time being. Moreover, I don't want to try to fly back home to Stockholm these days not only because I have bureaucracy left to do in Spain related to my mother, which will take several weeks to sort out, but also because I'm not certain about what further travel bans will be implemented across Europe. If I go back to Sweden now, I may not be able to come back in the next weeks to finish legal paperwork,” she told The Local.

The situation has changed so fast that Eva only has winter items in her luggage, and will need to buy more clothes in order to get through the Spanish spring.

The family have also put on hold a trip to northern Spain, where they had hoped to follow her mother's wishes to put her to rest in their family tomb. They are worried that the travel could put them at extra risk.

“On the positive side, I'm staying close to my family and my job is remote so I can continue working (almost) normally while staying in Granada,” she adds. “But meanwhile, I'm missing Sweden a lot. I feel incomplete without a cardamom bun and a walk in Djurgården.” Many people are working remotely due to the coronavirus. File photo: Stina Stjernkvist / TT

'I'd rather wait it out in Sweden than at home'

An American reader of The Local who works in education and asked to remain anonymous, was also forced to make a tough choice about her travel plans as the situation and travel advice changed day by day.

In a long-distance relationship, she had plans for a two-week trip to Sweden to visit her boyfriend, but was faced with the risk that if she came out to Sweden she might have to stay much longer-term and if she stayed at home, she might not see him for a long time.

“I was overwhelmed by the amount of information regarding how travel between the US and Europe is being affected, including misinformation provided by our president,” she said. “I had some friends saying, 'Don't travel!' and others saying, 'Go for it! You're at no more risk there than here.'”

In the end, she decided to take her flight, and arrived in Gothenburg just a day before the EU's entry ban was set to take effect for non-EU residents.

“Upon arriving to Sweden, the passport control agent told me to enjoy my stay because I might be here a lot longer than I planned,” she said.

Although she had to weigh up the potential risks of either decision, she decided that waiting out the coronavirus in Sweden was the right decision: “My workplace will be moving to online classes after spring break for the foreseeable future, so I'll be able to teach my classes from Sweden and not worry too much about my return flight home if there are no flights out. I only get to see my boyfriend for about six months of the year, so self-quarantining in his home is far preferable to sitting alone in my own.” Stockholm's Arlanda airport is much emptier than usual, but some are trying to return to their families as travel bans are introduced. Photo: Fredrik Sandberg / TT

'I won't get my typical Indian wedding'

“I am supposed to get married on April 16th in New Delhi. Everything was in place till last week,” said reader Manak, an IT consultant.

Postponing the wedding would have had an “emotional and financial impact”, he said, but he was well aware of the risk of travelling.

Manak was supposed to travel to India on April 1st, but moved this forward to March 15th after arranging with his employer to work from home for several weeks. This change meant that he could follow the advised 14-day quarantine for incoming travellers before the wedding.

The following day, India introduced an entry ban on arrivals from EU countries, including Indian nationals.

“I am not going to have a typical Indian wedding but at least won't be postponing it. I am hoping the situation will improve and I will head back to Stockholm,” he said.

'I've experienced racism due to the virus'

In Sweden and in many other countries, there have sadly been reports of racism aimed at people of east Asian appearance.

One reader, who is half-Japanese, half-Taiwanese and moved for Sweden for love, said the outbreak had exposed an ugly side of society.

“I experienced racism in the Stockholm subway due to the coronavirus and my skin colour,” she said. “On the afternoon of March 12th when I got on a crowded subway in Östermalmstorg, Stockholm, there was a woman who covered her mouth immediately when she saw me, and turned her back to me and then kept turning her head around to stare at me then turning away several times. It made me feel very uncomfortable.”

She said that a similar thing had happened to a Chinese colleague, adding: “These are minor and passive aggressive acts, but still I hope things will change one day. It is a difficult time for everyone who lives in Sweden, and my purpose in sharing this experience is hoping that this will not happen again to other people.”

'I don't know if or how I can move to Sweden'

“My family and I were planning to move to Sweden from Germany in early April. Now Denmark has closed its borders for the most part, I don't even know if or how I can start working in Sweden in May,” said a German resident who asked to remain anonymous.

She is set to start a PhD in Stockholm this summer, and has contacted her landlord in Stockholm to see if the family can make the move while ferries are still running, but has not yet heard back.

“Half a year ago I never would have thought that the biggest problem I'd face getting my first job would not be getting it or, once I had it, the problem would not even be finding an affordable flat in Stockholm. Nope, the biggest problem is getting to Sweden by car with most of our belongings,” she commented. 'I've had to return home'

One student from Ireland arrived in Umeå for an Erasmus semester in January.

“When I arrived it was like a dream, just perfect. Recently though, it has become a very different experience. Many of my classmates and I expect that our classes will go online. I have bought some extra food, in case I become infected. Nearly every event is being cancelled. It is a stressful time for everyone but I keep in contact with my friends and family by video calling; I read books and do art, and have embarked on a 1,000-piece jigsaw puzzle.” she said.

When she first contacted The Local, she was hoping to stay in Umeå, partly due to fear that by travelling home she risked picking up the virus and passing it to family members with underlying health conditions.

But she later said she had decided to return, in order to be with her family during a worrying time, and planned to self-quarantine once she arrived.

“I have still enjoyed my Erasmus funnily enough. My time here in Umeå has been wonderful, and I will return at some point in the future. My sister is a radiation therapist and she told me that by far the vast majority of her patients (despite half of them being palliative care patients), are usually in a good mood. If people who are literally dying of cancer can try to put their best foot forward, then so can I.”

'I had symptoms after travel to Italy'

One reader originally from Italy, who also asked to remain anonymous, has cancelled vacation plans and has been working from home. Due to the difficulty of getting a test for those with only mild symptoms, he is concerned he may have had the virus.

“I travelled to Italy and came back to Stockholm (through Paris) on February 13th. I didn't travel to the north of Italy but it's clear that the spread of the virus was undetected in many places around Italy and Europe. I got sick about a week later. The symptoms were dry cough, fever, sore throat, weakness in general. I've been in bed for a week, with a very weird dry cough, which is uncommon for me,” he said. “I called the doctor several times, trying to see or get opinion from a doctor, or a coronavirus test, because I was quite unsure what to do. The nurse on the phone told me, 'I'm sure you are fine, it's just a cold'. Without a doctor's certificate, I went back to work on February 24th. I had no fever, but I was still coughing and weak in general. After two days I decided to take more sick days because I was getting worse again, so I stayed home another week. I tried to call the doctor again to get a test, but got the same answer.

“My girlfriend and many coworkers got sick after me. Now I've been back at work for about ten days and am wondering, what if I really had the virus?”

Thanks to everyone who shared their experience with us. Although we weren't able to include all the submissions, we read each of them and we are truly sympathetic to the challenges Sweden's international residents are facing right now. If there's anything you'd like to ask or tell us about our coronavirus coverage or how the outbreak has affected you, please feel free to get in touch.