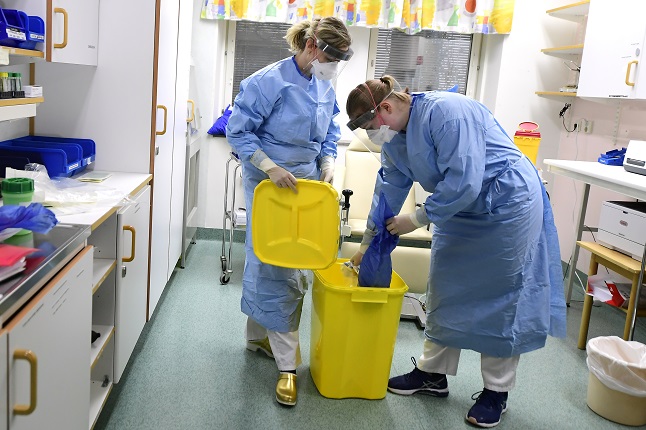 A group of researchers at Gothenburg's Sahlgrenska University Hospital have evaluated two commercial tests which would be able to identify antibodies in a person's blood and establish if they had already had the coronavirus.

The results are promising, and here's why that's important.

One problem being faced in Sweden and the world is that the virus causes such different reactions in different people that it's hard to know how many people may have already had it. Researchers believe the virus mutates slowly, which means that having it once is likely to offer some level of immunity, at least for a certain length of time.

“This is important for finding out how many have been infected without symptoms, which is important in turn for in the long-term determining how we achieve herd immunity in society,” said virologist Jan-Åke Liljeqvist, speaking to the TT news agency.

Similar tests have been carried out in other countries, and the goal of the Swedish test was partly to confirm the results and partly to adapt the tests to Swedish laboratories.

“At the moment there's a high demand for the tests, which means it may take at least two to three weeks before they can be used on a wide scale in Sweden,” said Liljeqvist.

Alcohol manufacturers Absolut have stepped in to help. The healthcare sector has warned of a potential shortage of essential materials including hand disinfectant, so Absolut is adapting parts of its manufacturing in order to produce pure alcohol which can be used for cleaning purposes, instead of vodka.

Already, 200,000 litres of the disinfectant have been produced, the company told SVT Nyheter. It will then be mixed with gel made by another manufacturer, in order to create products including hand gel.

The company will allow Swedish authorities to decide who gets the end product, rather than selling to the highest bidder, with the intention that it will be used in the healthcare sector.

Scania and SAS send staff to help in healthcare

Both vehicle manufacturer Scania and airline SAS have temporarily laid off thousands of staff due to the coronavirus crisis.

Some of these staff will now work in jobs which are crucial in the fight against the virus.

And hundreds of SAS employees – many of whom already have medical training – will receive a short training course in nursing and then help out in the country's hospitals, Sveriges Radio reports.

Researchers in Luleå are using 3D-printing to make face masks

Protective masks are another of the pieces of equipment for which the healthcare sector anticipates a high need.

Researchers at Luleå University of Technology will use their 3D-printers to start manufacturing masks for those working in healthcare. These will be sent to the municipality and local hospitals for free, reports P4 Norrbotten.

Swedish scientists are testing a medicine developed to fight ebola

Researchers around the world are looking into possible medicines and vaccines that could help against the coronavirus, and that goes for Sweden too.

Some people who are seriously ill with the coronavirus in Sweden have been treated with an experimental medicine which was first developed to fight against ebola.

The Swedish Medical Products Agency gave special permission for the use of experimental drug Remdesivir, first developed to fight ebola but not effective enough against that disease. However, the scientists involved in the trial said the drug has had a good effect in test tubes against both the coronavirus and related viruses.