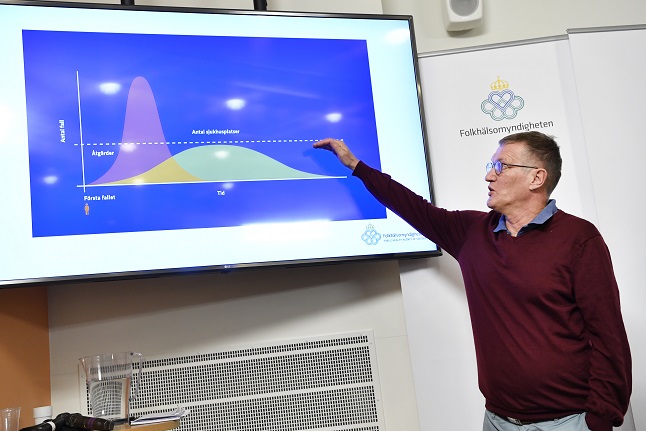 State epidemiologist at a press conference urging members of the public to 'flatten the curve'. Photo: Jessica Gow / TT

The agency says that Sweden's 'day zero' — the moment that the curve mapping the number of seriously ill people starts to rapidly incline — has not yet arrived.

That's on a national scale.

Stockholm may be nearer to its “day zero” than other parts of the country, or it may have arrived. The Swedish capital, the country's worst-hit region, on Wednesday evening reported that 18 coronavirus patients had died within 24 hours, almost doubling the total deaths in the region.

The Public Health Agency has long been saying that Stockholm is further along the curve than other parts of the country. The agency has also stressed that this is a disease where the effects take some time to be visible, so those deaths reported this week were mostly patients who were infected around four weeks ago, before Sweden introduced slightly stricter measures such as advising people to work from home if possible, avoid all non-essential domestic travel, and self-isolate if they belong to a risk group.

State epidemiologist Anders Tegnell told the TT newswire on Thursday that it was “not impossible” that Stockholm had now reached 'day zero'. “But we need a few days in order to know that,” he said.

Asked why Stockholm's regional healthcare director had described the coronavirus situation in the capital as a “storm” just hours after Tegnell said the national situation was “relatively stable”, the state epidemiologist said: “There is no discrepancy. Things can happen in four hours.”

He added that there was currently no plan to put Stockholm under a lockdown, saying: “We have the greatest spread of infection in the major cities, but we see spread in all parts of the country. If you do an assessment of the effects of closing off the major cities, the effect would be very minor.”

What happens after Day Zero?

The agency has made forecasts for how the demand for health care across different regions will vary, as a result of the coronavirus epidemic.

This demand will increase quickly once 'day zero' is reached and the spread of infections takes off, and the agency has estimated how many different types of hospital beds will likely be needed in each region at the outbreak's peak.

The curves show, for example, that the region of Skåne, in a worst case scenario, might need at least 500 isolated beds and around 200 intensive care units when the need for medical assistance is at its highest point.

This peak is expected to arrive around 80 days after 'day zero'.

A region like Dalarna in the central part of the country is expected to need 110 isolated care units and around 40 intensive care units after 64 days.

And Stockholm, which today reported a sharp rise in deaths and infections, is forecast to require around 900 isolated beds and at least 250 intensive care beds 87 days after day zero.

“The intensive care departments will have to carry a heavy load. Currently, the different Swedish regions do not have the resources, but it seems like the capacity needed can be built up, given that the health care institution has some time to do so. It should be able to work and I think it looks positive, more so than a couple of weeks ago,” said Anders Tegnell, state epidemiologist at the Public Health Agency. Field hospitals have been set up in Gothenburg and Stockholm to cope with the expected high numbers of seriously ill people. Photo: Adam Ihse / TT

Speaking on Tuesday morning, he said: “Contrary to many other countries, like Great-Britain or Germany, the number of infections in Sweden has not yet started to incline dramatically, despite the fact that 36 Swedes have already died of covid-19 [the disease that the virus causes].

“No region, not even Stockholm where the virus has spread considerably, has already experienced their ‘day zero’. Everything lies still ahead of us. Moreover, day zero will most likely not arrive simultaneously in the different Swedish regions.”

This may no longer be true after the report on the jump in the death toll in Stockholm on Wednesday, but Tegnell says that if the peak arrives at different times in different areas, that's good news, because then the different regions might be able to assist each other.

He added that it should be possible to delay 'day zero' by following the recommendations advised by the agency: reducing social contacts, staying at home when showing any signs of symptoms, and most importantly by ensuring that the at-risk elderly members of the population aren't affected.

People in Sweden have been asked to avoid non-essential visits to elderly relatives, and those in risk groups including the over-70 age group have been urged to self-isolate, avoiding all social contacts including shopping.

“Following this scenario we will put a considerably smaller workload on the health care system and we will witness a considerably smaller amount of cases. We keep our fingers crossed that the situation will continue as it is at present. In that case we can avoid this excessively high top of the curve and if we by that time approach summer, the amount of cases might be much less than what the prognoses say today,” said Tegnell.

The forecasts were calculated based on the situation in China and Northern Italy but adjusted to Swedish conditions. Tegnell stressed that these calculations weren't certain, but that they would be adjusted in parallel with the continued spread of the virus.

“It’s the experiences we have from China and other countries, but then we don’t know how it will turn out exactly. The longer we are able to wait for the peak with relatively few cases, the smaller the last wave of infections will be. That’s what we believe today. We’ll certainly be correcting the prognoses in some weeks, and that’s how we’ll be continuing to work,” he said.