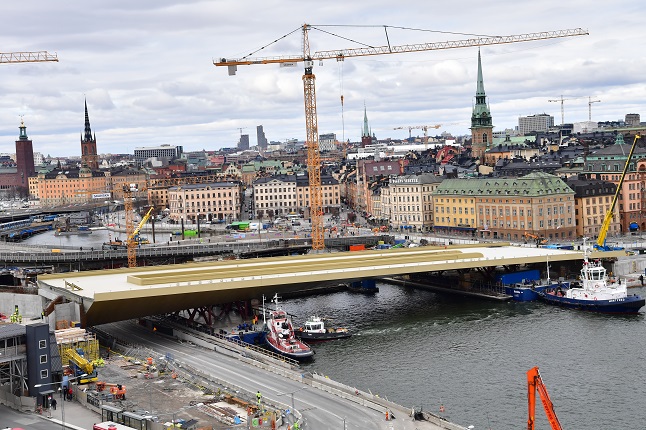 A golden-coloured bridge arrived in Stockholm after a long journey from China. Photo: Jonas Ekströmer / TT

Stockholm's newest landmark, a gold bridge to link the central islands of Södermalm and Gamla Stan, arrived in the city last week after a journey on a cargo ship from China. It took five years to build the 140-meter-long, 3,500-tonne piece of infrastructure.

The bridge set sail on January 2nd and was delayed by strong winds before finally arriving. It was put into place at the Slussen transport hub, where it is expected to last at least 120 years.

Five baby bears were born at Stockholm open air museum Skansen this year, the largest litter ever at the site and an unusually large group of siblings for the species, whose litters are usually between two and four.

The bears were born back in January, and ever since they have been in their mother's den. 2016 was the last time that bears were born at Skansen, and that time a set of triplets was born.

Skansen is currently open to visitors, although anyone showing any symptoms of illness (including a cough or sore throat) is asked to stay at home, and the park has increased its cleaning procedures. The bear enclosure is currently not accessible in order to avoid disturbing the bears, but in April it will be possible to see the young animals.

For now, here's how the last litter of cubs looked when they first started venturing out:

Spring and sunshine are on the way

A lot of us might be spending more time at home than usual right now, but the arrival of spring might bring you some needed comfort and reassurance that life will continue.

As of this week, Stockholm now has more than half a day of sunlight each day.

We made it! Over half the day is now filled with sun.

It would be unbelievable if it were not entirely predictable with math and science.

Cherry trees in beauty spots like Stockholm's Kungsträdgården are blossoming, as are many other springtime flowers. Try checking out the hashtag #vårtecken (signs of spring) on Instagram for a soothing break rather than crowding these areas, or you can go on a virtual tour of a previous year's cherry blossom here.