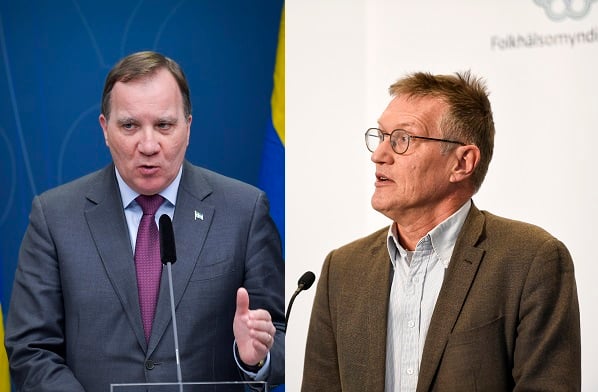 The title of state epidemiologist or statsepidemiolog was probably little known to many people in Sweden before the coronavirus outbreak.

Now the holder of the title, Anders Tegnell, is one of the most-discussed people in the country. Tegnell gives daily updates on the situation in Sweden, reminding the public of official recommendations introduced to fight the outbreak, on behalf of the Public Health Agency (Folkhälsomyndigheten).

State agencies, including the Public Health Agency, are not able to pass laws themselves, but they can give recommendations to the government. Some of the rules that have been brought in to deal with the virus outbreak, such as restrictions for restaurants and cafes and a ban on public events over 50 people, have come following consultation with the agency.

It is written into the national constitution that Sweden's public agencies are independent of the government. There are two main goals of this: ensuring that decisions are made based on knowledge and expertise, and limiting corruption, because ministers cannot have influence in agency decision-making.

A minister who tries to issue direct commands to an agency over how to handle a specific issue — either an individual case, or day-to-day decision-making — could find themselves accused of 'ministerial rule' (ministerstyre) by political opponents. Overruling government agencies or disregarding their advice is usually seen as politically risky, even though it's not specifically forbidden in most circumstances.

“There is a strict line of division when it comes to responsibility, and in the corona crisis this is quite visible. The government has its role in taking the overall lead, but all the time has to respect the expertise and independence of the agencies,” Li Bennich-Björkman, a professor in the Department of Government at Uppsala University, tells The Local.

“This division goes back very far in time to the 17th century. There is a strong idea in Sweden that civil servants should be safeguarded from the pressures that come from the political side. It lives on, and I think it's done what it was meant to do. There is very little corruption in Sweden.” Each weekday at 2pm, there is a press conference with representatives from various government agencies relating to the coronavirus. As well as the Public Health Agency, this sometimes includes the National Board of Health and Welfare, the Swedish Public Employment Service, the Civil Contingencies Agency, and any other agencies with updates to share.

The Public Health Agency has existed in Sweden since 2013, when the centre-right government of the time appointed Johan Carlson to be its director, a post he still holds. Although governments appoint the directors of state agencies, these positions are usually kept even following changes in governments, as in the case of Carlson, who remains in his role under the current centre-left government.

For comparison, in neighbouring Denmark and Norway, the national equivalents to Sweden's Public Health Agency advised against the closure of schools. In both countries, the governments decided to take this measure anyway, with Denmark's health minister saying: “We have no evidence that everything we are doing works. But we would rather take a step too far today than find in three weeks that we have done too little.”

And Public Health Agency general director Johan Carlson told Swedish TV that his colleagues in other countries are “concerned” about the impact of strict lockdowns.

“If you want to succeed with measures that need to be kept in place for months, you have to have acceptance and understanding. There are lots of things that are banned in society, drug use for example, but it does not disappear for that reason. Basically, the population must have their own insight and understanding. This is how we have worked in infection control,” Carlson explained.

But as Tegnell has become the figurehead for the Swedish response, his predecessor and former state epidemiologist Johan Giesecke told the TT newswire he wondered if epidemiologists had been given “a bit too much power”.

“The government should make other considerations, but they let us decide,” he said, pointing to the Norwegian and Danish school closures as an example of how Sweden sticks more closely to expert guidance. Unlike in other countries where prime ministers hold daily press conferences on the virus, it is a rare occurrence for Stefan Löfven to give a national address. But he's still the one ultimately responsible for the decisions made. Photo: Anders Wiklund / TT

How successful the measures are in Sweden will not only be down to authorities, but also the general population. Political professor Li Bennich-Björkman also highlights the responsibility of the individual in reducing the spread of the virus.

Aside from the new regulations for events and restaurants — and several measures to mitigate the economic impact of the virus — most of the measures from Sweden have come in the form of 'recommendations' from the Public Health Agency.

This includes strong recommendations to follow good personal hygiene, avoid non-essential domestic travel, for over-70s to avoid all non-essential social contact, and for everyone in the country to work from home if possible.

“There is a very high level of confidence among Swedish citizens towards authorities and the government, and I think this shown very clearly now because people's behaviour is still affected even though it's not legally enforced,” says Li Bennich-Björkman.

“And it's important to underline the confidence from the government and authorities towards the citizens. It's important for the trust to go both ways, because if authorities start to be more harsh in pushing people to do things, you could see citizens respond by having less trust and confidence in them in future. It's not just about the model of ministries and government, it's also about safeguarding the confidence we have between individuals and the government.”

This presents some challenges, and authorities have to work hard to reach those individuals who may not share the overall high trust for the government, including the immigrant community.

After reports that Swedish-Somalis were over-represented in Stockholm's coronavirus patients, for example, an information campaign was launched to share guidance and information about the virus through posters in multiple languages in Stockholm suburbs.

But Bennich-Björkman says that despite the prominent role of the authorities and the calls for everyone to act responsibly, it is still clear that ultimate responsibility and accountability for decisions taken lies with the government.

“The government can override them, if there's a state of emergency and things are changed constitutionally, which is highly unlikely in Sweden. But for me, it's a hypothetical question because why should the ministers think that you shouldn't listen to the experts?”