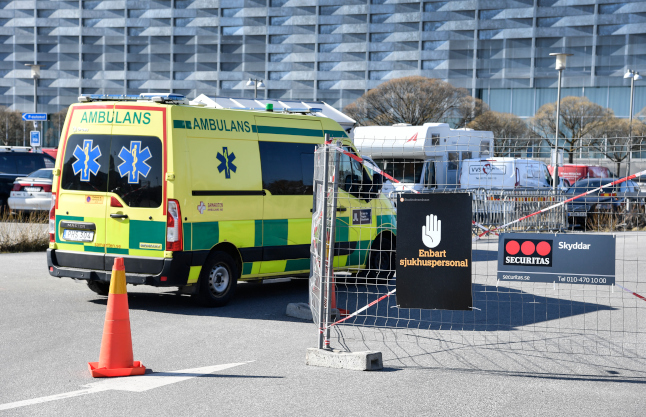 An ambulance outside a new field hospital set up at Älvsjö, which is ready to open but is not yet in use. Photo: Anders Wiklund/TT

Sweden on Tuesday reported another 114 coronavirus deaths, bringing the total to 591 in a country that has adopted a softer approach to containing the outbreak than some of its European neighbours.

Sweden's Public Health Agency said it had recorded a total of 7,693 confirmed cases of Covid-19 in the country of around 10 million people.

It reported 114 new deaths on Tuesday, an uptick from preceding daily tolls, but cautioned that some of the fatalities occurred in previous days.

State epidemiologist Anders Tegnell said on Tuesday that the country has been averaging “a little over 40” deaths a day in the past week.

He added that Sweden saw a slight decrease in the number of daily new confirmed cases of the new coronavirus over the last few days, but said it was too early to say whether numbers had peaked.

Sweden has not imposed extraordinary lockdown orders seen elsewhere in Europe to stem the spread of the virus, instead calling for citizens to take responsibility to follow social distancing guidelines.

The government has also banned gatherings of more than 50 people and barred visits to nursing homes.

The Nordic country's softer approach has drawn criticism and curiosity abroad and been the subject of fierce debate domestically.

Sweden's government has rejected accusations it was passive in the fight to curb the virus.