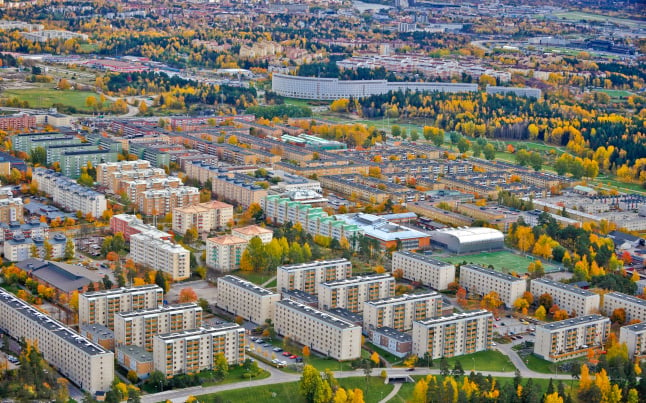 The Rinkeby suburb is one of the areas worst affected in Stockholm. Photo: Bertil Ericson/TT

A total of 3,143 people have been infected with the new coronavirus, also known as Covid-19, in Stockholm since the start of the outbreak – the region worst affected by the virus in Sweden so far.

Stockholm health authorities have now released new, and more detailed, figures showing the extent to which the infection has spread in the Stockholm region's municipalities and the city's districts.

Rinkeby-Kista, a suburb in northern Stockholm, is the worst affected with 238 confirmed cases. That's the equivalent of 47 per 10,000 people, more than the regional average of 13 per 10,000.

Nearby Spånga-Tensta follows with 37 cases per 10,000 people, or 144 confirmed infections in total.

Scroll down for a full list of Stockholm's districts and municipalities.

“We can now see that the infection is spreading throughout Stockholm county. We have previously reported an over-representation of the number of infected persons per 10,000 inhabitants mainly in the districts Spånga-Tensta and Rinkeby-Kista. Unfortunately, that seems to continue,” said Stockholm infectious disease doctor Per Follin in a statement on Tuesday.

The association for Somali-Swedish medical doctors in Sweden was last month the first to raise the alarm of coronavirus-linked deaths in socio-economically troubled northern Stockholm suburbs, with cramped housing, several generations living in the same apartment, a worse level of public health, and a shortage of information in several languages in the early days of the outbreak raised as possible factors.

Stockholm authorities said they had launched a major coronavirus information campaign aimed at residents in Spånga-Tensta and Rinkeby-Kista on March 18th, with information in 26 languages sent to for example shopping centres, businesses and representatives of religious organisations.


In Sweden, the official advice requires everyone to: