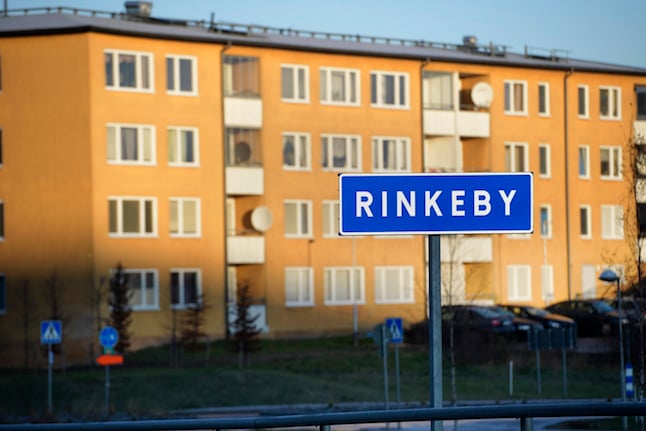 Rinkeby, one of the areas that have been hit hard by the coronavirus crises. Photo: Janerik Henriksson/TT

Squares, schools, libraries, community centres and healthcare facilities in several of Stockholm's northern neighborhoods are covered in leaflets from Swedish health authorities, communicating information in a wide variety of languages about how to protect yourself and those around you from the coronavirus.

But despite this large awareness-creating campaign among foreign-born communities in the Swedish capital's vulnerable suburbs, many of these areas have been hit disproportionately hard.

Has this multilingual information campaign simply come too late? Or are there other factors at play than just a lack of access to the most recent recommendations?

The latest figures from Region Stockholm show that on Monday the Rinkeby-Kista area had 238 known cases of the coronavirus, also known as Covid-19. In Spånga-Tensta 144 people were known to be infected. These figures equal 47 versus 37 cases per 10,000 inhabitants, numbers that are far above the average of 13 coronavirus infections for every 10,000 people living in the Stockholm region. Fredrik Jurdell, Stockholm City Council's director for the Spånga-Tensta district, mentioned worse public health and cramped living conditions as possible factors behind the area's overrepresentation in the coronavirus statistics. But he also highlighted the initial shortage of information in different languages, telling the TT news agency that “it is obvious that information hadn't reached all groups sufficiently”.

He said that after first learning about the spread of infection in these areas on March 23rd, authorities had taken measures to step up the information campaign through local and religious associations, and by speaking to people in public spaces.

But Stockholm's infectious disease expert Per Follin told TT on April 7th that the information campaign did not yet appear to have had an effect. “You would hope that you would start to see a change, but taken from these latest figures, the situation remains more or less the same. It's still the case that these areas have a high number of infections compared to other parts of Stockholm,” he said. The fact that these areas have seen a rapid spread of the coronavirus “doesn't mean that the people here are ignorant or that they are less inclined to follow the public health authorities' recommendations than, say, people living in Östermalm”, Ahmed Abdirahman, a policy expert at the Stockholm Chamber of Commerce and founder of the political festival Järvaveckan held in the northern suburbs, told The Local Sweden.

“We are dealing with a multi-faceted situation,” Abdirahman stressed, pointing out that the spread of the virus underlines long-existing issues around segregation.

Around two thirds of the Spånga-Tensta district's population were born abroad or born in Sweden with two parents born abroad, compared to for example Södermalm in central Stockholm where only 20.4 percent of its residents come from outside of Sweden, according to Stockholm City Council's official statistics. And the average income of workers in Rinkeby-Kista is less than half compared to Stockholm's wealthiest areas.

“Those who earn less and have a non-European background often live more concentrated than other people in Sweden,” said Abdirahman. “With the housing shortage and low wages, many extended families have no choice but to live together in a small apartment. On top of that, there's a lot of intergenerational living. So even if you follow all recommendations and you stay inside, there's a risk that you contract or spread the virus within your home.”

This, he mentioned, also has a cultural aspect. “Countries where many of the people living here come from, are much more socially oriented. For many communities it's a given that you care for your elders yourself.” Ahmed Abdirahman is the founder of the Järvaveckan political festival, which has been cancelled this year. Photo: Henrik Montgomery/TT

Abdirahman doesn't stand alone in this argument of overpopulated and intergenerational households: healthcare experts like Follin and state epidemiologist Anders Tegnell have also argued that areas with the highest numbers of cases are often those that are the most densely inhabited, enabling viruses to spread more rapidly than elsewhere.

It is exactly for this reason that the district authorities in Järva have decided to open up short-term housing for people living in crowded apartments and who want to temporarily live separately until the coronavirus crisis has subsided.

Yet that is not the end of the story. “The type of jobs most people here in Järva have put them at a greater risk, too,” said Abdirahman. “Not many of them do office work, like me, which would enable them to work from home. No: we're mostly talking about bus and taxi drivers, people working in elderly care, in restaurants, nurses and other staff in hospitals. What these jobs have in common is that they require workers to be in the proximity of other people.”

They are our silent heroes, Abdirahman said, keeping the country together. “But once one of them contracts the virus, it spreads very fast. These segregated areas are all small islands. Everybody uses the same one or two bus lines, the same couple of stores.”

Then there's the fact that, also before the current crisis, there has been a long-existing gap in overall health between those living in vulnerable neighborhoods and the rest of the Swedish population.

The differences in life expectancy are exceptionally large, with a resident of Stockholm's wealthiest areas expected to live several years longer than residents in poorer suburbs (in some areas the gap has been said to be as large as 18 years).

This discrepancy has been linked to a multiplicity of factors such as insufficient healthcare in the countries of origin, low wages and lower education levels, unemployment, limited access to and resources for a healthy diet and lifestyle, and a high demand on the local healthcare facilities.

But limited access to information remains a big part of the problem in the suburbs, Abdirahman said.

“Some people who live here don't speak Swedish as well as they want to, and there has definitely been a delay in translation. But even those who do speak Swedish often feel left out, for which the media are in part to blame. Why don't the mainstream media reach them? Because the people here feel that these outlets always describe their neighbourhoods from a problem perspective. There's rarely anything positive written about us here. All the attention goes out to the minority that is involved in violence or burning down cars. This has resulted in a trust issue with the Swedish media. Many people here have left them.”

The virus, Abdirahman concluded, does not care about your background or wealth. “But your chances of contracting Covid-19 still depend a lot on your living conditions and your place in society. Every 18th person in Sweden lives in a so-called vulnerable area where income, education and overall health is lower and housing overcrowding higher.”

Thank you for reading. If you are not yet a member, please consider supporting our coverage. If you have questions or feedback, email [email protected]. We are receiving an unusually large amount of emails at the moment and although we try to reply to as many as possible, we may not be able to reply to all. But we read everything and value your comments – membership means we work for you.