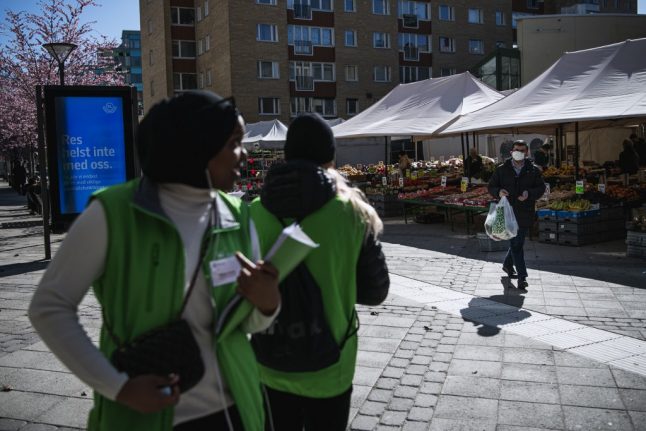 Teenagers hired by the municipality hand out information flyers in different languages to local people on April 9, 2020 in Jakobsberg, near Stockholm: Jonathan NACKSTRAND / AFP

Earlier this week, the country's Public Health Agency reported that Somali-born residents in Sweden were over-represented among those in need of hospital care for COVID-19, as were people born in Eritrea, Finland, Iran, Iraq, Syria, Turkey and the former Yugoslavia.

“For us the main signal is really that we need to reach those groups better with different kinds of messages to help protect them,” state epidemiologist Anders Tegnell told AFP, conceding that authorities don't know the reason for their over-representation.

Figures released last week by the capital showed that some poorer neighbourhoods had up to three times as many cases per capita.

Those municipalities are home to several of Sweden's “vulnerable areas,” a designation originally assigned by Swedish police to socio-economically disadvantaged areas with high levels of crime.

More than 550,000 people live in these 61 areas, according to a 2019 report commissioned by the local rights group the Global Village.

On average 74 percent of people in these areas had immigrant backgrounds, meaning they or both their parents were born abroad. The national average was 24.9 percent.

Local authorities have therefore been stepping up information efforts in these areas, distributing material in 26 languages other than Swedish.

In a municipal building in Jakobsberg — a suburb northwest of Stockholm — a group of seven teenagers are preparing to walk their rounds in the neighbourhood to inform locals of the risks of COVID-19 and what they need to do to limit its spread.

Donning green vests, they head out into the April sun, carrying flyers with information about the disease and taking up positions on streets and squares to approach pedestrians.

“Primarily we are trying to reach those who might not understand what gets reported in the Swedish news,” 17-year-old Mustafa Jasem tells AFP.

“There are some areas here in Jakobsberg that are vulnerable, that have problems, and where news and information doesn't reach,” Warda Abdalla, also 17, adds. Teenagers hired by the municipality hand out information flyers in different languages to local people on April 9, 2020 in Jakobsberg, near Stockholm: AFP

The flyers are in various languages: Russian, Finnish, Arabic, Tigrinya, Somali and Persian to name a few.

Even before the coronavirus pandemic, the teenagers worked for the municipality, meeting once or twice a week for outreach projects as “youth ambassadors”.

Sofia Quell, the local coordinator for segregation and integration, says the youth ambassadors are just one way authorities are trying to connect with hard-to-reach groups.

“It's not just about printing the information in different languages, but also about figuring out which channels of information people are comfortable with,” she explains, adding they also rely on sporting clubs and cultural organisations to improve communication. Teenagers hired by the municipality prepare information flyers in different languages to hand out to local people in Jakobsberg, near Stockholm: AFP

Information is key to Sweden's strategy, as the country has not imposed the harsh lockdown orders seen elsewhere in Europe.

It has instead urged citizens to take responsibility and practice social distancing. Authorities have also banned gatherings of more than 50 people and barred visits to nursing homes, but have not closed shops, bars and restaurants, and primary schools remain open.

In late March, the Swedish-Somali Medical Association reported that of the first 15 deaths in Stockholm, six were people of Somali origin.

Jihan Mohamed, a doctor and association board member, told broadcaster SVT that information had not been available in Somali early on.

But she said there were other reasons why that group might be at particular risk.

While Sweden has one of Europe's highest rates of single-person households, in the Somali community “multiple generations can live in the same apartment and that can be a factor.

“At the same time we know that public health is generally worse in vulnerable areas,” she noted.

Hamid Zafar, an Afghan-born former school principal in Gothenburg, agreed, writing in an op-ed in newspaper Goteborgs-Posten that lack of information was not the main problem.

Rather, Zafar argued it was authorities' lack of insight into cultural differences.

He noted for instance that the recommendation to refrain from visiting elderly relatives would be inconceivable among certain immigrant communities.

A distrust of authorities could also play a role, but the authorities' real “blind spot” was that immigrant communities sometimes have their own social networks, power hierarchies and authority figures.

He also noted that Swedish authorities strongly discouraged people from travelling at Easter, but failed to mention the risks of cramped housing or living with elderly relatives.