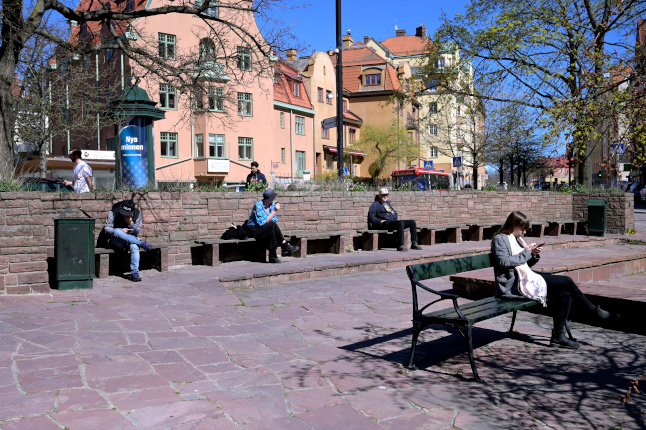 Editor's note: The Public Health Agency on Wednesday withdrew the report mentioned below, writing on Twitter: “We have discovered an error in the report and the report authors are currently going through the material again. We will republish the report as soon as it is ready”. They said they would share more information about the nature of the error once this was done.

The report said that there were around 1,000 times as many people infected by the coronavirus in Sweden as the number of confirmed cases, a figure that was questioned by Swedish journalist Emanuel Karlsten at the press conference as it did not match up with the rest of the report's figures. There are currently over 15,000 confirmed cases of the virus in Sweden, and 1,000 times this figure would amount to more than the country's entire population.

The Public Health Agency concluded in a report using statistical models that 86,000 of roughly two million residents in the wider Stockholm area had the virus on April 15th.

According to the official tally, Sweden has recorded 15,322 cases nationwide since the outbreak began including 6,200 infections in the Stockholm area.

The researchers used modelling based on reported cases and a study of randomly selected Stockholm residents.

“According to this model the peak was reached then and after that we can expect fewer cases per day, but that doesn't mean the infection stops,” Anders Wallensten, deputy state epidemiologist, told a press conference.

By May 1st, the model suggests that a third of all Stockholmers will have had the virus.

The report, which can be read in full in Swedish here, said that the calculations estimated that around 400,000 people were or had been infected in Stockholm by April 11th. At that time there were 4,000 confirmed cases.

He added that this did not mean people should take a more relaxed attitude to the country's guidance – such as social distancing and good hand hygiene – on reducing the spread of infection.

Sweden has not imposed the extraordinary lockdown measures seen across Europe, instead urging people to take responsibility and follow official recommendations.

Gatherings of more than 50 people have been barred along with visits to nursing homes, and universities and upper secondary schools have introduced distance teaching.

The strategy has come under scrutiny since mortality rates leapt ahead of its Nordic neighbours, Finland, Denmark and Norway, which have all instituted more restrictive containment measures.