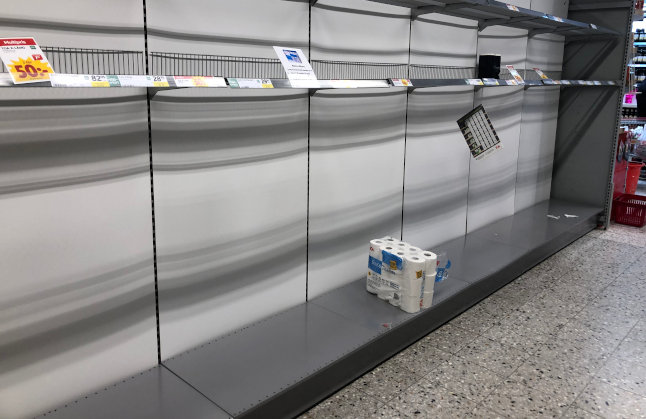 This was a common sight in Sweden last month, but is less common now. Photo: Adam Ihse/TT

Sweden's food retail industry saw sales grow by 12.8 percent in March compared to the same month last year. The normal average growth rate tends to be around three percent, according to a new report by the Swedish Food Retailers' Federation and HUI Research.

“The corona crisis significantly affected consumer behaviour and the food retail industry in March. At the start of the month we saw a strong stockpiling trend among consumers,” Karin Brynell, CEO of the Swedish Food Retailers' Federation, said in a statement.

Non-perishable items such as rice, pasta, canned food, toilet paper and soap saw by far the biggest increase, as consumers rushed to stock up in the event of having to self-isolate at home during the outbreak.

Toilet paper sales increased by 71 percent in March, despite producers stressing that Sweden is a major producer of toilet paper with millions of new rolls coming out of factories every day.

Rice sales increased by a whopping 88 percent, canned food 76 percent, and pasta and soap by 70 percent.

Pictures of empty shelves of toilet paper and pasta were shared far and wide on social media last month, and we learned new Swedish words such as hamstra, but supermarkets have since been restocked.

Maria Bergstand, an operative manager from Sweden's Civil Contingencies Agency (MSB), told The Local at the time that there were no indications that the coronavirus outbreak would lead to a food shortage.

“We don't foresee that; all the supply chains are still working. Shelves in shops may be empty, because on a normal Friday in March last year people weren't all buying pasta and toilet paper at the same time and now they are, but in the next day or so those should be on the shelves again,” she said.

Online shopping also saw a major boost in March, according to Wednesday's figures, with an increase of almost 50 percent as many chose to stay away from supermarkets and avoid direct social contact with others.