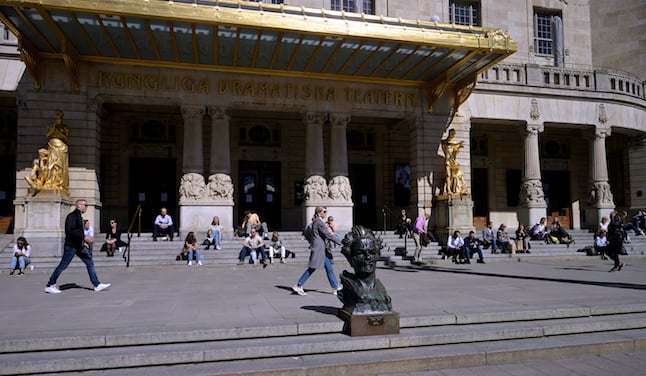 While most Europeans are in lockdown, barely allowed to leave their homes, it hasn't escaped anyone's attention that Swedish children can go to school, and that the public – apart from the sick and elderly – are still allowed to go out, have a beer, attend a yoga class or eat at a restaurant.

They do, of course, need to remain at a safe distance from each other. Nevertheless these are precious liberties that are out of reach for much of Europe.

Yet Sweden's aim is not that different from surrounding countries, state epidemiologist Anders Tegnell told Anne Grietje Franssen, a journalist writing for Dutch newspaper Trouw and The Local.

Tegnell believes that the contrast between Sweden and the rest of the world has been overstated.

“Like everyone else, we intend to slow down the spread of the virus to such an extent that the healthcare system and society won't collapse. Plus, protect our senior citizens,” he said.

Tegnell once was a largely invisible policy advisor, but since the outbreak of coronavirus he has become the face of the Swedish Sonderweg.

Like any public figure who is the face of a different approach, he is adored by some, disliked by others.

The goal, Tegnell continued, is similar to that of other countries, but the route to arrive there is different.”The Swedish strategy is mainly based on voluntary cooperation and individual responsibility,” he said.

In other words: the government doesn't prohibit but restricts, in combination with a range of open recommendations.

The reason Sweden has chosen this different approach has a number of explanations. Part of the story is that the legal framework in Sweden makes implementing a full lockdown virtually impossible.

“We can install limited quarantine measures,” Tegnell said, “but it is not legally feasible to lock down cities or regions – let alone the entire country.” Tegnell is, in fact, surprised countries have taken such measures.

“All (European) countries already have the virus, so why close the borders now? We are more concerned about the mobility within Sweden,” he said.

According to Tegnell it has by now been established that the spread of the coronavirus in Sweden is comparable to other European countries.

“This indicates that we are indeed able to limit the circulation of Covid-19 on the basis of recommendations and nudges”, the latter reminding the public that the situation remains serious and that, therefore, social distancing is as important as before.

The idea that the official social distancing recommendations are generally complied with seems to be reinforced by the fact that other recurrent viruses, like the flu virus, are momentarily nearly non-existent. Which appears to prove that: yes, we wash our hands, we keep our distance and we stay at home whenever we feel that we might go down with cold.

On top of that, deputy state epidemiologist Anders Wallensten has stated that these ‘voluntary restrictions can be maintained for much longer than a complete lockdown', the former being ‘more acceptable for the population in the long term'.

Covid-19 is not a disease that can be eradicated, Tegnell said, at least not until a vaccine is available, “which might take as long as two or three years”. “So we have to come up with sustainable solutions that keep the virus's circulation manageable for a long period to come.” Herd immunity is not part of our strategy, he said, but it is one of the results.

“It's the only way forward. Every country will have to achieve a degree of herd immunity, through vaccinations or otherwise.”

Severe restrictions have, in conclusion, not yet been deemed necessary by the Swedish government, although Prime Minister Stefan Löfven has made it clear that the situation is constantly being monitored, saying, in a recent press conference, that “people are getting ill, people are dying, and every day more Swedes are personally affected by the disease and its consequences”, before adding that it wasn't the time to relax the restrictions in place.

So far Sweden's health care system has been able to cope with the influx of corona patients. The number of intensive care units has more than doubled since the early days of the coronavirus crisis, from 526 to around 1,100, of which, Tegnell said, at least 20 percent is still available on a daily basis.

On April 23rd, the death toll in Sweden had reached 2,021. Since the beginning of the crisis, around 17,000 Swedes have tested positive for the virus, though it is believed that far more people in Sweden have already been infected with Covid-19.

Nordic countries are generally considered to have relatively similar societies so why this divergence over the coronavirus?

This, said Tegnell, is partly due to differences in the political and legal system. In Sweden, responsibility for public health and health care is decentralized and resides mostly with the regions, on the one hand, and with the specialized authorities – such as the Public Health Agency of Sweden and the Swedish Civil Contingencies Agency – on the other.

These specialist institutions have the most say in the final political decisions. The decentralization of the health care sector makes it difficult to, for example, issue nation-wide quarantine policies, but it also causes the government to endorse the recommendations of those with the most expertise.

This might sound self-evident, but several international equivalents of the Swedish health care authorities have given similar advice (like keeping the schools open) yet have subsequently been overruled by politicians.

Taking Sweden's neighbours' coronavirus curves into consideration, does Tegnell still think his strategy has worked out as intended?

The honest answer, he said, is both ‘yes' and ‘no'. “The healthcare sector is coping and there are still enough intensive care beds”, he said. “So in that sense, our strategy works as it should.”

“But what we have failed to do is to protect our elderly”, he also acknowledged. “At least half or the corona deaths have happened in care homes. This also explains the high fatality number compared with our neighbouring countries.

“We warned elderly care homes at an early stage, but something hasn't worked out as it was supposed to. We are starting an investigation into what exactly has gone wrong, but it seems that these homes in the Stockholm region are not adequately equipped to keep diseases out.”

Johan Giesecke, the former Swedish state epidemiologist and current advisor to the World Health Organization, is more succinct in his reply when asked:

“Only in a year from now can we know if the Swedish approach has been proven right,” he said.