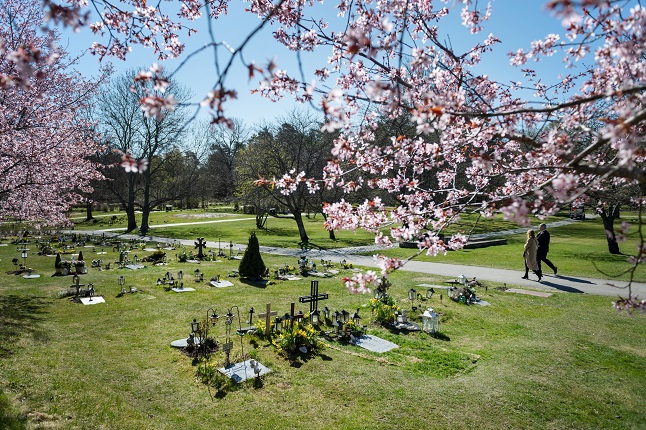 The discrepancy is due to differences in how the two agencies have registered deaths.

The National Board of Health and Welfare has published statistics showing all deaths in which the coronavirus, also called Covid-19, is listed as the cause of death.

“We are finding around ten percent more people than have so far come to light in the data from the Public Health Agency,” said Mona Heurgren, a department head at the National Board of Health and Welfare, during Monday's press conference.

“The statistics which the Public Health Agency has registered up to now are overall very similar. By that I mean in terms of who is affected, ages, sex, and underlying illnesses. But we do have a certain difference which is the number of people who have died as a result of Covid-19 up to today.” Speaking to the TT newswire, Heurgren explained: “The big difference is that we have also included cases which haven't been tested in a laboratory, but where the doctor responsible has documented that it's a patient with Covid-19.”

The Public Health Agency's figures – which are provided daily and have been since the start of the virus – tell us how many people died after testing positive for the coronavirus.

This means that the coronavirus was not necessarily the cause of death in all these cases, but because these figures are based on people who tested positive for the virus, it does not include deceased people who were never tested. The Swedish strategy for testing has changed during the course of the outbreak, and currently focuses on people who are seriously ill or belong to risk groups, including those in elderly care homes.

The Public Health Agency has been able to include deaths that take place outside hospitals through weekly checks of the national death register. It has followed this up by checking with individual regions how many of these deaths were people who had tested positive for the coronavirus.

So why has it taken so long to get the data based on the official cause of death?

The struggle to report accurately on the number of cases and deaths due to the coronavirus is a global one. This is due to factors including a global shortage of testing materials, the fact that it's a new virus and so scientists and doctors still have limited information about it, and the logistical challenge of responding to an entirely new virus.

Cause of death must be reported in Sweden following certain routines and the World Health Organisation's own framework, so it usually takes the healthcare sector between three and four weeks to send in the certificates showing cause of death. That's why it has taken some time for the figures to be available.

From today, they can be found on the website of the National Board of Health and Welfare (currently in Swedish only). The agency notes that the figures are not likely to show the total death toll, because more death certificates will be on their way to the agency.

These figures show that up until April 23rd, around 1,700 deaths (1,684) occurred in Sweden where Covid-19 was the cause of death. Around 90 percent of the deceased were aged over 70, just one percent were younger than 50, and the majority had one or more known risk factors.

According to the Public Health Agency's figures, as of April 27th a total of 2,274 people had died with the coronavirus, while there were over 18,000 known cases in Sweden since the start of the outbreak.

Of the deaths which had been registered in the National Board of Health and Welfare figures by April 21st, 82 percent were confirmed by a laboratory test – in other words, these deaths were also accounted for in the Public Health Agency's figures.

In 4.5 percent of deaths where the patient had tested positive for the virus (and was therefore included in the Public Health Agency's death toll), the death certificate showed a different cause of death, and these cases were therefore not included in the National Board of Health and Welfare figures. Johanna Sandwall of the National Board of Health and Welfare and deputy state epidemiologist Anders Wallensten speak to media on April 27th. Photo: Anders Wiklund/TT

Speaking at Monday's press conference, deputy state epidemiologist Anders Wallensten said that there will always be differences between different methods of reporting.

“Another way of seeing the total number of deaths is then to look at excess mortality, where you see cases which perhaps haven't even received a diagnosis from a doctor. The important thing is to have consistent reporting which can be evaluated on an ongoing basis over time,” he said.

Figures on the excess mortality in Sweden, or the difference in the death toll this year compared to an average of the same period over the past few years, were also published this week by the country's national statistics agency.

These figures showed that during the week before Easter, Sweden recorded its highest number of deaths in the 21st century.

According to preliminary figures from Statistics Sweden, a total of 2,505 people died in the week of April 6th-12th, equivalent to 358 deaths each day and in total almost 150 more deaths than in Sweden's second deadliest week of the century, back in 2000. The third and fourth highest death tolls to date also come from spring 2020.

Stockholm, the epicentre of the coronavirus outbreak in Sweden, has seen an especially high death toll. Between March 30th and April 19th, the weekly death toll has been more than double the average for the same weeks over the past five years. Five other regions have seen a doubling of the five-year average death toll on at least one week this year: Uppsala, Södermanland, Östergötland, Gotland, Västmanland and Dalarna.