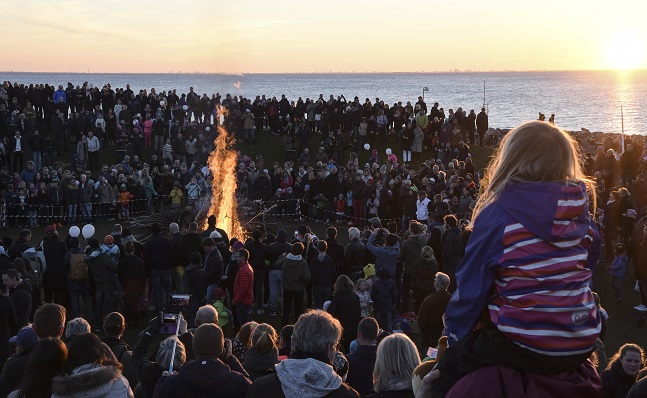 Valborg typically sees people gather in large crowds to celebrate around a bonfire, as in this photo from Malmö in 2017. Photo: Johan Nilsson/TT

In normal times, valborgsmässoafton or Walpurgis Eve on April 30th is marked with large bonfires in public parks and other locations across the country.

It's a celebration of the end of the cooler months and anticipation for the coming summer, and it's particularly popular in student cities where it coincides with the end of spring term exams.

This year, large celebrations will not be possible due to a ban on public events with over 50 people and national guidelines to avoid gatherings with large numbers of people and to keep a distance from others in public spaces. The prime minister and other authorities have repeatedly stressed that this applies even to traditional festivities.

“The traditional Valborg celebration is cancelled,” warned Interior Minister Mikael Damberg at a press conference this week. “During Easter, we saw large responsibility shown by the people of Sweden. I'm proud that large parts of the population are making big sacrifices in their everyday lives. This behaviour saves lives.”

The minister said there was a risk of people gathering in places such as parks, but said that local municipalities and police would make efforts to stop this happening, and that individuals were expected to take responsibility.

“Now we have to take the same responsibility when it comes to the spread of infection. It's about making the effort. Holding out. This isn't just a tip. It's a rule that must be followed.”

Damberg also issued specific instructions to parents of teenagers, saying: “I think people should keep an eye on their youngsters ahead of Valborg. Both that they don't head to parties, but also that they don't gather in large groups. We mustn't have large gatherings of young people.” A previous year's celebration on the Stockholm island of Kungsholmen. Photo: Jessica Gow/TT

Dozens of planned bonfires and celebrations around the Swedish capital have been cancelled, but some organisers have come up with alternative ways to mark the date.

Scouting group Mälarscouterna will livestream its bonfire and celebrations in Norra Ängby – you can join in online here. The group will also have people at the site of the bonfire to remind anyone who turns up of the restrictions in place. You can also watch a livestreamed bonfire and concert from Ulriksdals Slottsteater, here.

Around 150,000 people usually celebrate Valborg in the university town of Uppsala, with many travelling there from further afield for activities including a raft race along the river. The municipality and university have repeatedly said that this year the entire celebration is cancelled, holding an unusual joint press conference to stress the importance of following the recommendations.

The city has recommended that people living outside the city abstain from trips to Uppsala this year, and advised locals to celebrate Valborg by exploring the area's nature reserves, alone or in small groups, instead. The evening will also see extra police patrols in the city.

University city Lund is typically home to one of the biggest events in the entire country, with tens of thousands of people gathering to picnic and party in the city park Stadsparken. Here's how the celebrations usually look in Lund; this picture is from 2018. Photo: Johan Nilsson/TT

But this year, the park will be closed on April 30th to stop spontaneous gatherings, and local officials have also taken the unusual step of spreading out hen manure across the park to further deter from picnics.

This is partly because the event in Lund has no official organiser and has simply become a tradition, so there is no one in the position to officially cancel it.

“Sitting in a park that stinks of chicken manure is not a pleasant experience,” municipal chairperson Philip Sandberg noted in a Facebook post.

Although the southern region of Skåne has not yet been as badly hit by the coronavirus as Stockholm, regional police have warned that there is still community infection in all parts of the region and that following recommendations to keep distance and avoid gatherings is just as important in Skåne as elsewhere in Sweden. Lund has taken the unusual step of closing off the main park. Photo: Johan Nilsson/TT

What about May Day?

May 1st is a public holiday in Sweden, but unlike in many other European countries, it's not a day of public celebrations – that all happens the evening before, on Valborg.

However, it is a day traditionally associated with workers' rights movements, and usually sees large demonstrations and marches across the country.

These have been cancelled due to the guidelines to avoid non-essential travel and large gatherings, and instead the leaders of the Social Democratic and Left parties will hold speeches via YouTube.