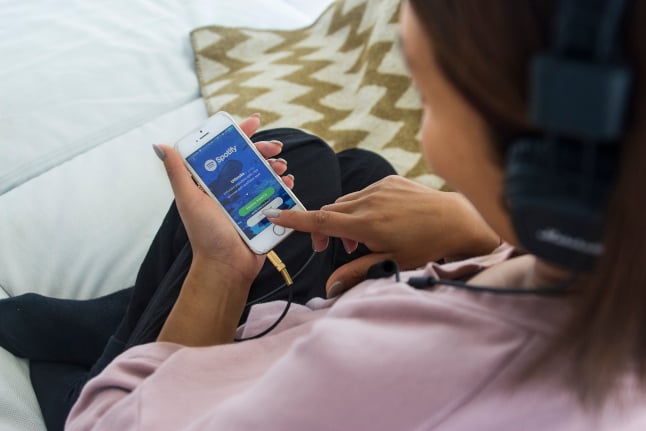 Spotify said it had rebounded after an initial drop in markets with major coronavirus lockdowns. Photo: Isabell Höjman/TT

The net profit of one million euros ($1.1 million) during the first quarter compares to a loss of 142 million euros a year earlier.

The company reported 286 million active users of which 130 million were paying subscribers, a 31 percent rise for both from a year earlier.

“Despite the global uncertainty around Covid-19 in Q1, our business met or exceeded our forecast for all major metrics,” Spotify said in a statement.

Revenue came in at 1.85 billion euros for the quarter, with revenue from premium subscriptions accounting for 1.7 billion.

Posting a narrower operating loss at 17 million euro, compared to 47 million in Q1 of 2019, the company edged out its small profit of one million thanks to improved finance income – which consists of revenue generated by temporary surplus cash invested in short-term investments and securities.

Spotify said it had seen its business impacted by the novel coronavirus starting in late February with a drop in listeners in hard hit markets like Italy in Spain.

However, the company said that “over the last few weeks,” listening had started “to rebound”.

According to Spotify the number of users “grew substantially even during lockdown periods in major markets.”

Also standing out was how users had changed their listening habits as a result of worldwide lockdown orders.

“Not surprisingly, we have seen usage in Car, Wearable, and Web platforms drop,” the company said, adding that audience listening through smart TVs and game consoles had “grown materially”.

The streaming service also reiterated its full year guidance, saying it expected to reach between 143 and 153 million paying subscribers and between 328 and 348 million active users in 2020.