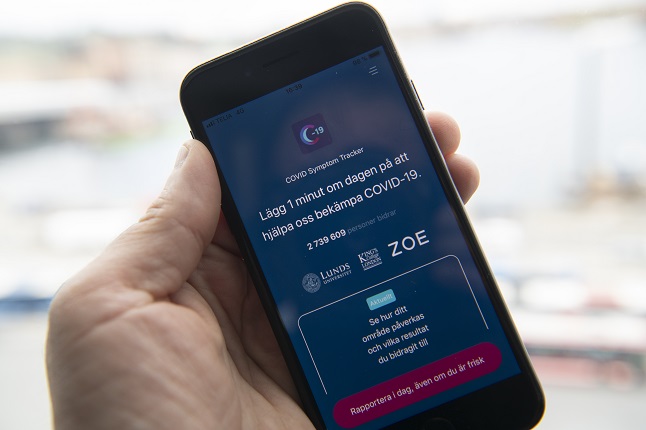 The app is a variant on one which has been used in the UK for around a month. Photo: Fredrik Sandberg / TT

The app has been launched by Lund University and is a version of an app which has been used in the UK for one month, where more than 2.5 million people have signed up to register their symptoms, and in the USA for two weeks.

“The [British] public health system NHS has called on citizens to download the app, and they use the data for decision-making,” said Paul Franks, a professor in genetic epidemiology at Lund University, who worked on the development of the Swedish app.

Similar symptom-tracking apps are being used elsewhere, including in Norway.

The app was launched in Sweden on Wednesday morning, and in its first day was downloaded by more than 2,000 people. Franks said: “I am optimistic that we can map out the spread of symptoms in the country.”

In a recent article for The Conversation, the professor explained “Combining nationwide self-reported data with directly assessed seroprevalence testing is likely to be a highly effective way of tracking the spread of SARS-CoV-2.”

But the Public Health Agency, the body that is largely managing Sweden's coronavirus response, was sceptical over how useful the app would be, saying that it already has its own data. On Monday, the agency halted a digital tool that the Civil Contingencies Agency (MSB) had put together, which had various features including recording symptoms.

State epidemiologist Anders Tegnell explained the decision by saying: “In this situation our assessment is that the risks [of the app] were significantly greater than the advantages which would have been very small.”

Commenting on the new app from Lund University, he said: “I really hope that they have done it with collaboration with the regions, who are going to need to handle the increased pressure if it occurs.” In Sweden, it's the 21 individual regions who are responsible for management of healthcare.

Paul Franks said he thought it unlikely that a symptom-tracking app would cause any increased burden for healthcare services.

“I don't know what data they're basing that statement on. It would be interesting to see it, because it's not the experience from other countries where the app is used,” he said. “But I think there is quite a big difference between our app and the one MSB developed, since our app is less invasive and doesn't put forward any diagnoses.”

The Lund University team informed the Public Health Agency at the start of April that work was underway on the app, but it has taken time due to the need to get legal and ethical permits.

Franks said: “We haven't had any detailed communication [with the Public Health Agency]. If the data is helpful for them, we will happily share it.”

The Public Health Agency has also used other kinds of data to help in its calculations around the coronavirus. For example, mobile network Telia has shared anonymised data on users' movements, which showed a significant decrease in travel around the Easter holiday weekend.

The agency is also currently carrying out randomised testing on individuals across the country to get a better picture of the spread of the virus, following randomised testing in Stockholm — the epicentre of the outbreak in Sweden — a few weeks ago.