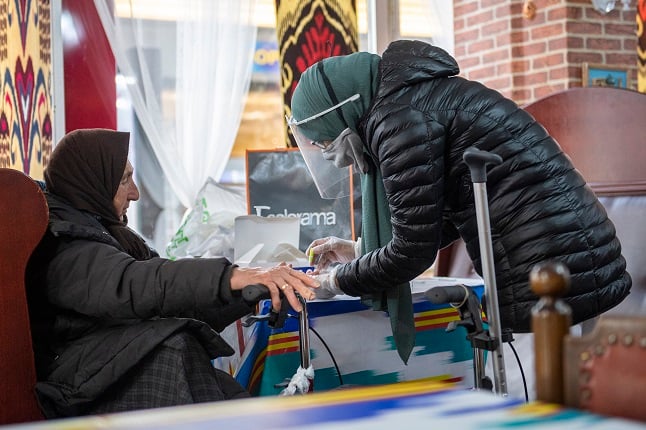 Antibody tests are carried out in Tensta, one of the hardest hit areas of Stockholm. Photo: Ali Lorestani / TT Hospital staff work outside St Görans Hospital in Stockholm, which has been caring for coronavirus patients since the earliest stages of the outbreak in Sweden. Stockholm remains the epicentre of the outbreak, with around half of all known cases and deaths, but this week there were signs of a rise in the infection curve in several other regions. In Gothenburg, people are urged to follow social distancing in this piece of street art featuring the face of state epidemiologist Anders Tegnell. People sit on benches but keep their distance outside a park in Gothenburg. A large billboard from Stockholm's healthcare service reminds locals of the 'two-metre rule', referring to social distancing guidelines, in the busy Södermalm district.

Authorities have been criticised this week for inconsistency in the guidelines from different agencies, after the Public Health Agency suggested keeping a distance of “an arm's length”, and the agency said the discrepancy was due to the difficulty in naming a specific figure that is appropriate for all situations. A memorial for Sweden's victims of the coronavirus has been set up outside the parliament building. This week the confirmed death toll passed 2,500. During the weekend at the popular Hellasgården nature reserve, families picnic while a sign reminds them 'Avoid crowding'. The ban on large gatherings has put a stop to demonstrations, including the weekly school strikes for the climate that began last year when Greta Thunberg started protesting outside Sweden's parliament. In Malmö, demonstrators found a way to protest without breaking social distancing rules, leaving shoes on the steps where they would have stood. City officials in the student city of Lund closed the city park and covered it in chicken manure in a bid to prevent spontaneous gatherings during the festival of Walpurgis Eve on April 30th. In central Stockholm, one of many shops that has filed for bankruptcy holds a closing-down sale. A hotel in central Stockholm forms a heart by lighting up empty hotel rooms, in order to send a sign of hope and raise awareness of how badly the tourism industry has been affected.