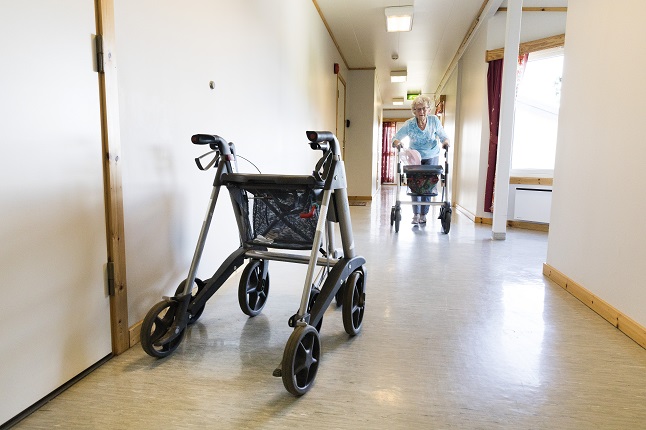 Several factors have been suggested as possibly being behind the spread of the infection in care homes, but there is no one common denominator. File photo: Gorm Kallestad/NTB Scanpix/TT

According to a survey carried out by Dagens Nyheter, at least 2,500 people in 541 care homes across the country have reported cases of the virus.

Statistics from the National Board of Health and Welfare published on May 6th showed that of the people aged above 70 who died of the coronavirus in Sweden (90 percent of the total victims), around half lived in some form of special housing, while a quarter had home carers.

Sweden isn't the only country where care homes have seen devastating levels of infection spread. Residents of elderly care homes have accounted for a large proportion of fatalities in countries like France and Spain where the infection arrived earlier and total deaths have been much higher than in Sweden (and where care home deaths have not always been included in official tolls), as well as in Denmark and Norway which have otherwise seen significantly lower death rates than their Nordic neighbour Sweden. There will be lessons countries can learn from each other, and in Sweden health authorities are also hoping that regions with a currently low spread of infection can learn from the situation in the hardest hit regions.

The Public Health Agency is now working with the regions Stockholm and Sörmland, which have been the two worst hit areas both in general and within the care home sector, to investigate what happened in care homes.

How did the infection get into the homes?

The coronavirus is a highly infectious disease, and even with measures in place there are several ways the virus could have entered the homes.

At Swedish health authorities' joint daily press conference on May 4th, the Public Health Agency's Head of the Department for Antibiotics and Infection Control Malin Grape said there was no clear common factor that pointed to how the infection got into care homes in Stockholm and Sörmland.

Some of the possibilities the Public Health Agency has pointed to after speaking with care homes include new arrivals to the homes or residents returning from hospital stays, family visits, or asymptomatic staff.

Another potential factor is the large number of hourly employees who may not be able to stay home from work without risking losing their salary. In the Sörmland region, these employees as well as those who work for staffing companies and not an individual home make up at least a fifth of all staff in more than half the region's care homes. How did the infection spread?

Given that the virus spread so quickly in so many areas, perhaps the more important question than how the virus entered the homes is how it spread between residents — and how this spread within individual homes could have been limited.

In the Stockholm region, at least 212 of the 400 elderly care homes have reported cases of the coronavirus. All of the homes had imposed restrictions on visitors, most of them by mid-March before a national ban on visits to care homes on March 30th.

The regional infectious disease units in both Stockholm and the neighbouring Sörmland regions have carried out surveys looking into the level of infection and measures taken, in an effort to create more robust measures to protect the elderly.

Two of the key factors that emerged in Stockholm were the difficulty of ensuring safe distance between residents, and the need for staff to stay home from work with the slightest respiratory symptoms.

“Many of the elderly people find it difficult to remember and understand instructions, which is often the reason why they have moved to a retirement home. Not least people with dementia. Many homes state that this makes it makes it difficult to stop the spread of infection, so this is a priority area,” said infection control physician Per Follin from Disease Control Stockholm. He added that homes with reported coronavirus infections were more likely to have had employees show up to work despite respiratory symptoms and/or a fever. “This shows how important it is to stay home with the slightest symptom of illness,” said Follin.

Nonetheless, significant measures had been taken — and Follin said that a weekly fall in new infections was evidence these were working. These measures included changed cleaning routines, visiting bans, training, changes to how staff and residents interacted, and protective material for staff. In Stockholm, there was access to protective equipment at almost all the homes surveyed at the time of the survey in mid-April.

Care home management have been instructed from early on in the outbreak to ensure that staff stay home with the slightest symptoms of illness, to limit the number of people each worker interacts with, and to ensure good hygiene practices are followed.

“A lot was done, and it was done very, very fast,” said Follin.

One way that the elderly care sector can fight infection is to separate people who have dementia and are infected with the coronavirus. This makes it less likely that these people will forget their instructions and inadvertently infect others, and in Stockholm three such homes have already been opened, creating space for 62 people to move to temporarily.

Individual care homes are also exploring options to make visits possible — and safe — once more. The national ban on visits is still in place, but if homes are able to ensure low-risk visits they can be permitted in some situations.

In Falkenberg municipality, plexiglass screens have been installed to allow visits to take place at a safe distance. The screens, which cost around 10,000 kronor each, will soon be in all the municipality's ten homes. Then, half-hour visits will be able to take place via the transparent screens, and volunteers have offered to supervise so that the visits don't place an extra burden on care home staff.