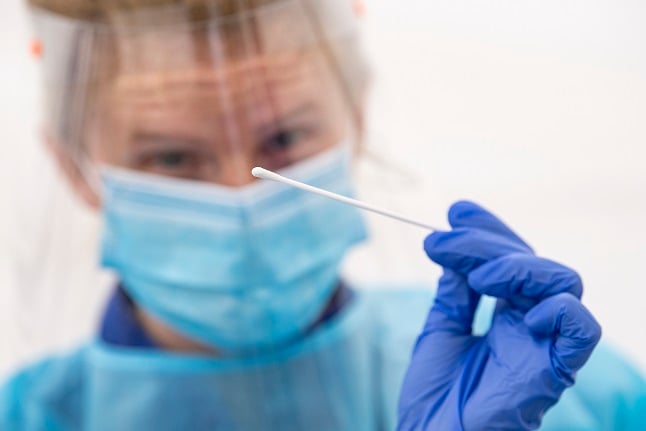 Who gets tested in Sweden?

The two groups who are supposed to be prioritised in testing for the coronavirus are people with symptoms of the virus who are ill enough to need hospital care, and people working in healthcare or elderly care who may have the virus.

At the moment, people with respiratory or cold symptoms but not in need of hospital care are not prioritised for testing, but instead are asked to stay at home while they have symptoms to reduce the risk of spreading the infection.

The decision on which groups are tested is made by each region's infectious disease physician, so it may vary slightly based on regional capacity.

How many people have been tested in Sweden?

As of May 5th, a total of almost 148,500 people have been tested for the coronavirus in Sweden.

But that still puts it at a low total when compared to many other countries worldwide.

As the table from Our World in Data shows, by May 3rd when Sweden had tested 148,500 people, Denmark had tested 233,799 people; the UK 882,343 and Italy 1.46 million. Both Italy and the UK have populations around six times the size of Sweden's and appear to be at a later stage in the outbreak with close to 30,000 deaths in both countries, but Denmark's population is around half the size of Sweden's.

And the table below showing tests per 1,000 people as of early May reveals that testing per capita is significantly lower in Sweden (14.7 as of May 3rd) than in its Nordic neighbours Denmark (44.5 as of May 5th) and Norway (34.98 as of May 5th).

The tests per capita is also lower in Sweden than in European countries with similar populations such as Portugal (44.97 tests per 1,000 people as of May 3rd) and Switzerland (33.09 as of May 4th).

Will the number of tests increase?

The government in mid-April gave the Public Health Agency the task of increasing testing capacity, with a goal of having capacity for 150,000 tests per week.

That's around three times the capacity that was available in mid-April. On April 17th, the Public Health Agency said that the country had capacity to test around 50,000 samples per week. At the time, it said this capacity was sufficient to test all those in priority categories, although there were “some regional exceptions”.

On May 5th, Health Minister Lena Hallengren told Swedish TV that laboratory capacity had been increased and could now analyse 100,000 tests each week. Although that is still around three times more than the number being carried out, she said she hoped that 100,000 tests would be carried out in Sweden by mid-May. That's behind the original aim of reaching this figure by the end of April. Without more tests, how do we know the level of spread in society?

One way that the Public Health Agency is doing this is through testing of a random sample of people.

In early April, around 4,000 people across Sweden were invited to participate in random tests, which is one way of working out how the infection has spread across Sweden. A similar random survey was previously carried out in Stockholm, the worst hit area of the country.

Researchers also have other ways of estimating the level of spread, including using data from other countries to work out the likely number of total cases in Sweden based on the number of deaths and confirmed cases.

What about antibody testing?

The tests referred to above can tell you if you currently have the virus.

A separate type of test, called antibody tests, could tell you if you have already had the virus. This is useful because scientists believe that people who have had the virus will have some level of immunity against infection, although we don't yet know how this immunity works or how long it would last for. It could help people who work with vulnerable groups return to work, and Sweden is working to make these tests available — with a focus on those working in the healthcare and elderly care sector to begin with. People who have had coronavirus-like symptoms but not been tested may also be curious to find out if they've had the virus. Tests are not widely available for the general public and although some tests are available at private clinics, the Public Health Agency recommends against doing these as they aren't believed to be accurate enough to be reliable.

On April 17th, the Public Health Agency said that the country had capacity to test around 50,000 samples per week. At the time, it said this capacity was sufficient to test all those in priority categories, although there were “some regional exceptions”.