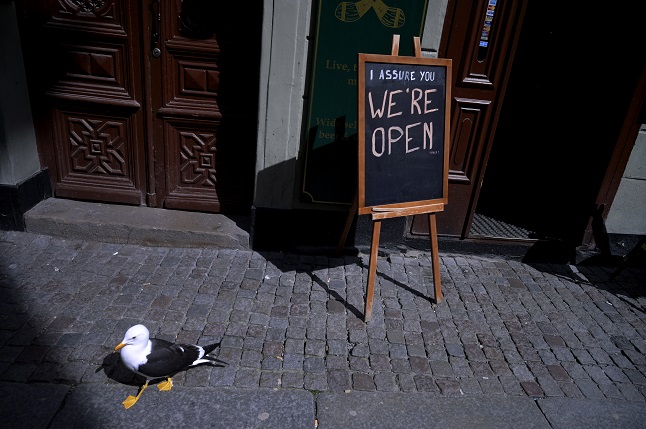 Above, a tent for patients with respiratory symptoms has been set up outside the chapel of Stockholm Sjukhem, a private hospital and nursing home for people with chronic or long-term illnesses. People relax in the square at Årsta, a suburb just south of Stockholm city centre. A football pitch is closed off in Viksjö, Järfälla, north of the capital city. A sign at an Ica supermarket in suburban Stockholm requests that only one shopper per household enter the supermarket, while family members should wait outside. This is not a general requirement in Sweden, where shops and businesses have simply been asked to ensure that social distancing can be followed in whatever way makes most sense. “It will be OK,” promises this handmade decoration. With people asked to minimise social contacts and unnecessary visits to friends, some crafters have been leaving artwork with positive messages in windows and public spaces. Most of Sweden's over-70s have been largely isolated for close to two months. But in Malmö, Elly was able to celebrate her 90th birthday from her fourth floor apartment with the help of helium balloons set up by her family. A drive-in concert under a stormy sky in Gothenburg last weekend. Social distancing while waiting for the bus in Solna, north of Stockholm. But some are still gathering in large numbers, as shown in this image of a motorcycle meetup outside a McDonalds restaurant in central Stockholm. In Sweden the upper limit for public events is 50 people, but when it comes to private events and gatherings the advice is to use common sense, avoid non-essential journeys, stay home if showing any symptoms of illness and not to meet people who belong to risk groups. And finally, something completely different. Each year, around 30,000 salmon are released into the water in Stockholm, a tradition that started in 1973 to preserve the possibility to fish in the city centre. Usually it's an event that attracts large numbers of visitors, but this year it was streamed online due to the ban on large events. This picture captures some of the action.