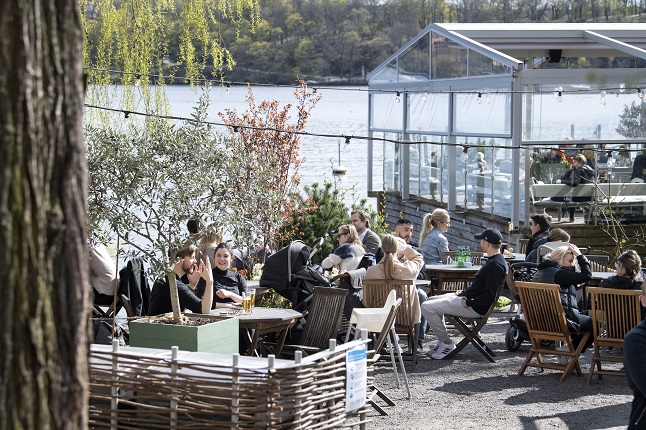 People fill up (spaced out) tables at an outdoor restaurant terrace by the water in Stockholm. Photo: Jessica Gow / TT

The figures are based on mobile data collected worldwide, showing where people spent time and how long for, and how the figures for March 15th to April 26th compare with January and the first week of February.

Sweden stands out in the figures. In the category 'retail and entertainment', which covers restaurants, shops, cafes, and museums for example, activity in Sweden fell by 13 percent.

That's a significantly smaller drop than in other countries. Movement in the same category fell by 45 percent in Finland, 43 percent in Norway and 22 percent in Denmark. In Italy and Spain, where very strict lockdowns have been in place, the corresponding figure was 92 percent.

This may not be too surprising since Sweden has not issued orders for any non-essential businesses to close, instead asking them to follow guidelines to help ensure social distancing such as limiting customer numbers and ensuring distance in queues. In restaurants and bars, tables must be spaced out and bar service is banned, with a handful of establishments having been temporarily closed for violating these rules.

The Swedish population has also continued to use public transport at a higher rate than in many other countries. The current advice to everyone in Sweden is to avoid all non-essential journeys, and in Stockholm the public transport operator SL has asked anyone not fulfilling an essential function in society to avoid travel altogether.

At train stations, bus stops and similar locations, activity in Sweden had fallen by 31 percent, which compares to 45 percent in Denmark, 37 percent in Norway, and 56 percent in Finland. Again, the fall was even higher in Spain and Italy, with a more than 80 percent reduction in both of these countries.

On the other hand, activity in green spaces such as parks and nature reserves increased significantly in all the Nordic countries, including by 82 percent in Sweden.

Within Sweden, it was residents of the region Jämtland who had changed their behaviour most, with a fall in activity related to 'retail and entertainment' by 38 percent and a 52 percent reduction in public transport use. There were also significant reductions in Stockholm, so far the worst hit region, where activity was down 22 percent in retail and 40 percent in collective traffic.

But in Halland and Blekinge, the mobile data showed that people were actually out and about more than in January. Activity in 'retail and entertainment' had risen by four and eight percent respectively in these regions.

Similar data from the Telia mobile network last week showed a slight upward trend in travel, despite repeated warnings from authorities in Sweden that the danger is not over and recommendations to keep distance and avoid unnecessary travel still apply.

The Telia data tracked mobility patterns where people move more than 500 metres, and does not reveal reasons for travel – whether it's for leisure, grocery shopping or going to and from work – whereas the Google data is based on the locations people spend time in rather than the distance travelled to get there.