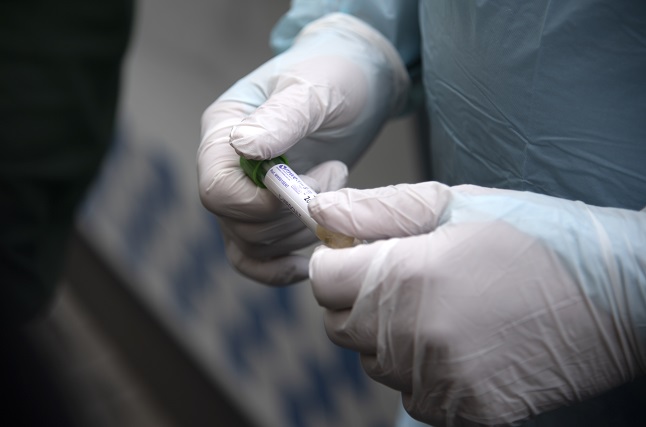 File photo of a medical professional in protective gear carrying out a test. Photo: Anders Wiklund/TT

It is not yet clear exactly what level of protection a person who has had the coronavirus has against future re-infection, but the aim is to make it easier for employees to start working as normal when it is safe to do so.

Around 2,000 Stockholm-based employees of Tele2 are now being tested through Werlabs.

Employees who are shown through the test results to have already had Covid-19, the illness caused by the coronavirus, the idea is that they could return to offices and work almost as normal fairly soon.

“But it's not happening yet,” said Fredrik Hallstan from Tele2's press department.

Clothing giant H&M also has the chance to test around 5,000 workers.

“This is completely voluntary and neither the H&M Group nor the Public Health Agency will see results on an individual level, but will only be able to see anonymous, aggregated data,” the company's press office said.

Werlabs has not made public which other companies have been included in the pilot study or how these companies were chosen. But these three companies all have shareholders who also have a stake in Werlabs, as DI Digital has reported.

Werlabs says there is no aim of making profit through the tests. “The companies pay for the tests and Werlabs provides the test based on a prime cost principle and at no profit,” CEO Henrik Forsberg told TT in an email.

The company is one of several private healthcare companies offering coronavirus tests, and the results will be sent to the Public Health Agency to get a better picture of the spread of infection. Following an agreement with the agency, prioritised groups such as vulnerable people and healthcare workers should be the focus, but Forsberg said: “We are also in agreement with the Public Health Agency that a smaller part of our test capacity shall go to companies in the Stockholm region to get a representative sample and create a better understanding of the spread of infection.”

The tests in question can tell you if you have had Covid-19, if the sample is reliable enough. Experts have criticised the reliability of some of these tests, and the Public Health Agency currently recommends against getting antibody tests other than those offered within the healthcare sector.

“The test has been evaluated by several laboratories in Sweden and also the Nordic reference laboratory Noklus in Norway. We are completely in line with the authorities on this. I have no comment on how other actors carry out their tests,” wrote Forsberg.

The Public Health Agency writes on its website: “We are currently working on making recommendations for how [antibody tests] should be validated as well as how the results should be evaluated based on current knowledge. When tests become available, they will primarily be used for staff in healthcare and care.”

It is still unclear what level of immunity previous infection by the virus provides, and how long for. But several studies have shown that people who have been infected do have some antibodies that according to the World Health Organisation would likely “provide some level of protection” against re-infection.

Earlier today we tweeted about a new WHO scientific brief on “immunity passports”. The thread caused some concern & we would like to clarify:

We expect that most people who are infected with #COVID19 will develop an antibody response that will provide some level of protection. pic.twitter.com/AmxvQQLTjM