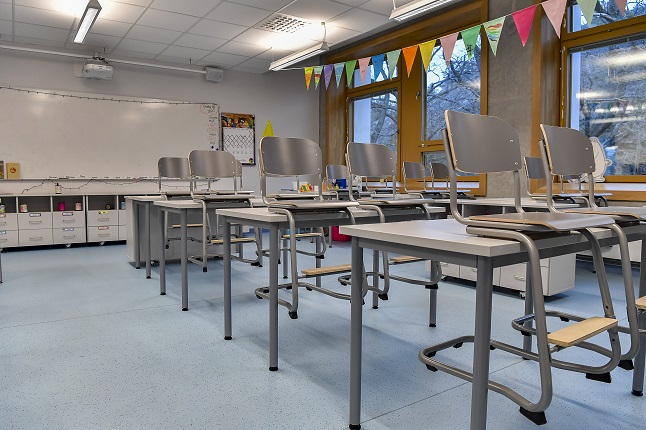 This classroom in Stockholm is empty, but the current advice is for under-16s to attend school if healthy. File photo: Jonas Ekströmer/TT

Schools for upper secondary education (over-16s) and universities have been recommended to close and switch to distance learning, but closing schools for younger children has not been considered a necessary measure in Sweden.

This is partly due to the nature of the virus. Studies suggest children are both affected by the virus and transmit it to a lesser extent than adults, and the Public Health Agency said that other countries at more advanced stages of the outbreak had not seen any virus clusters linked to schools.

In Sweden, where a very high proportion of families have both parents in full-time work, closing schools was also considered a more disruptive option than elsewhere.

“It is not possible to just close schools without knowing where the children are going – for both social, psychological but also infection prevention reasons,” the Public Health Agency's general director Johan Carlson said in March. “Many parents with important jobs for society, for example those working in healthcare and welfare would have to stay at home with their children. It is not possible at the moment to replace the parents with the grandparents, which is perhaps otherwise common.”

Individual schools have the option to close if needed, and there have been closures across Sweden, but for the most part schooling is continuing face-to-face, with the following adjustments advised by authorities.

Anyone with the slightest symptom of illness, including a cough or sore throat, is asked to stay at home in Sweden, and that applies particularly in schools.

Washing hands regularly and thoroughly with warm soap and water is still believed to be the most effective way to prevent transmission of the coronavirus. The Public Health Agency has recommended that schools put up posters explaining the importance of hand hygiene, and ensure there is plenty of soap, paper towels, and chances to wash hands, with hand sanitiser in places like dining rooms or entrances. The Public Health Agency has recommended that school premises are cleaned at least once a day, including cleaning toilets, surfaces like doors and handrails, and wiping toys, computers, and textbooks.

Rules limiting public events to no more than 50 people do not apply to schools.

However, schools in Sweden have been asked to limit large gatherings of students such as assemblies as much as possible, and to space out tables and chairs. The Public Health Agency also recommends staggering class, break, and lunch times to avoid large numbers of students mixing at the same time.

It's quite common in Swedish schools to spend time outside when possible, especially during the spring and summer months. This is especially important during the pandemic, since research shows that viruses spread less easily outside.

So schools are advised to look for opportunities to move activities outside, although close contact sports and games should be avoided. The coronavirus outbreak remains extremely uncertain, and it's possible that the restrictions in place could change quickly. That's especially true after parliament passed a new law that means the government can make certain changes without going through parliament, including closing some or all schools.

And if this happens, the government has prepared for how to deal with the consequences of a speedy closure order.

School principals have been given increased decision-making powers so that they can introduce measures relating to the outbreak, including deciding to close the school or change how teaching is carried out, such as by adjusting the timetable.

For example, it's possible for a school to limit the number of students in school by only allowing in students with special needs, those who have exams at the end of the year which will impact their future education or career, and/or those with a vulnerable home environment. Or teachers may be allowed to conduct their lessons online, or at different times from usual.

Sweden has fast-tracked legislation that enables municipalities to offer childcare for parents in essential jobs, such as healthcare and welfare, if schools do end up having to close. This was not previously possible, because Swedish law states that everyone must be treated equally.

This article was compiled using information from the National Agency for Education and the Public Health Agency.