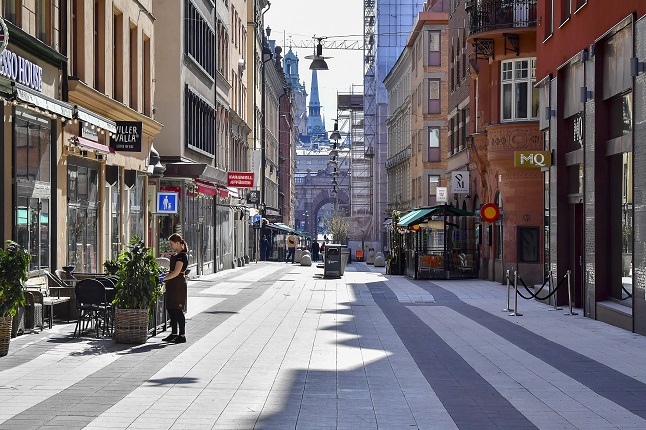 Streets in the city centre are emptier than usual, but fewer people are avoiding public places. Photo: Jonas Ekströmer / TT

No region in Sweden reported a “critical” need of protective equipment, but several remained in a difficult situation, the National Board of Health and Welfare said on Monday.

The agency's crisis manager Johanna Sandwall said: “We have received a lot of deliveries and are giving out a lot of materials. We also have deliveries on the way in the near future, and up until summer, which we consider stable delivery chains.”

In Sweden, the 21 regions are responsible for healthcare and in the earlier weeks of the crisis, many of them reported a serious need for equipment, particularly long-sleeved overalls. As recently as April 27th, Sandwall said there was still a critical need for protective clothing.

In the regions reporting a serious need for equipment, Sandwall said this was “more about endurance over time than being able to handle day-to-day needs”.

She emphasised that Sweden's healthcare sector remains under considerable stress, but that the situation was stable. 'A decrease in all the figures'

Also on Monday, Sandwall reported that the number of people in the country's intensive care units with coronavirus was 466, after that figure fell below 500 for the first time in a month last week. A further 1,621 people were being treated for the virus in hospital but on other wards.

Meanwhile the number of total available intensive care beds also fell slightly, to 1,002, meaning there was around 30 percent spare capacity.

“That the number of available places is reducing is natural when we have a reduced number of patients,” said Sandwall. “We are seeing a decrease in all the figures we work with.”

The comments came at Monday's press update from the Public Health Agency and other state agencies.

The Public Health Agency's figures show that a total of 3,256 people have died after testing positive for the coronavirus, an increase of 31 from the previous day. These figures don't show the number of deaths that took place in the past 24 hours due to differences in how Sweden's regions report deaths, and a delay in reporting over weekends. But there were signs of a less welcome downward trend in surveys carried out by the Civil Contingencies Agency (MSB), which showed that people in Sweden were starting to relax some of the changes they made to life due to the outbreak.

“We're seeing that the numbers [of people who are changing their habits] are falling. There are fewer who are following the news more than usual, fewer who have reduced their participation in social activities, and fewer who are limiting their travel on public transport,” said Svante Werger from the MSB, urging people in Sweden to continue to follow official recommendations.

“Here we see the possibility of some kind of break in the trend. The picture of a more relaxed relationship to the recommendations matches with what regional councils have reported to us,” said Werger.