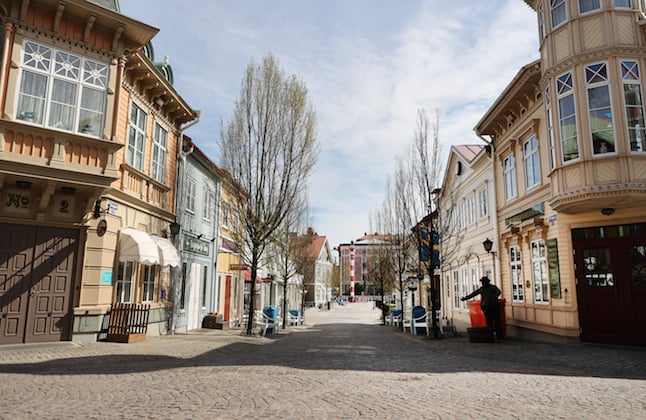 The empty amusement park Liseberg in the city of Gothenburg. Photo: Adam Ihse/TT

A virtual walk through Haga

Haga is one of the oldest and most charming neighbourhoods in Gothenburg. The pedestrian street Haga Nygata is lined with well-preserved houses, many in the characteristic Gothenburg style called landshövdingehus with one floor in brick and the rest in wood. Today they house plenty of independent shops and cafés.

The fika (coffee with something sweet) you will have to cook up yourself – brew a strong cup of coffee, bake or buy several kanelbullar or cinnamon buns – but some of the shopping can be done from your couch. As can the sunny stroll up and down Haga Nygata, simply by visiting Google Maps.

A taste of Gothenburg

Talking about fika – Gothenburg, as, frankly, the rest of Sweden, has a strong coffee tradition. But since the creation of internationally-known roasters Da Matteo, in 2007, specialty coffee has been a growing scene here, providing plenty alternatives to the traditional Swedish bryggkaffe or filter coffee. The Gothenburg roasters have opened up a world of espresso, V60, drip, Aero Press and all the other latest additions to the evolving coffee industry.

And if you can't get to the café, the café can come to you. Da Matteo ships its home-roasted coffee beans and equipment across the world.

Another west coast taste that can't be left out of the Gothenburg experience is the räkmacka or shrimp sandwich, made with rye bread, fresh sea shrimps, mayonnaise and a soft-boiled egg. A popular place to buy seafood in Gothenburg is the Feskekôrka, or Fish Church, usually selling the catch of the day. But, conveniently, fresh shrimps can be bought throughout Sweden and if you're in Sweden can even be ordered online. Experience the city with a book

What could be a better escape in these times than letting yourself be transported to another location and era through a book? There is plenty of untranslated Swedish literature that has Gothenburg as its main stage, if improving your language skills has been on your corona to-do-list.

If not, Simon and the oaks (1985) by Marianne Fredriksson is one beautiful example of a book, translated into English, and set in the Gothenburg of the mid-20th century. The book follows the Swedish man Simon Larsson throughout his childhood, adolescence, and adulthood. Larsson grows up with his adoptive, working-class parents, Karin and Erik. He befriends a wealthy classmate, Isaak Lentov, who has been forced to flee Nazi-Germany with his family. After Isaak's mother's illness requires that she stay in a mental institution, Isaak begins to spend more and more time with Simon's mother, who soon becomes a mother figure.

If you're more of a Nordic Noir type of person, you can try your luck with the works of Åke Edwardson. Edwardson is a Swedish author of detective fiction, and was previously a lecturer in journalism at Gothenburg University, indeed the city where many of his Inspector Winter novels are set. His first novel to be translated into English was Sun and Shadow, in 2005. The second, Never End, followed in 2006.

Gothenburg has not only been the stage to a number of novels, but, luckily, also to a multitude of series and films. One if the most recent and popular examples is the series 'Vår tid är nu', which is available on Netflix under the name 'Restaurant'.

Wait, isn't it set in Stockholm? Well, yes, or at least it pretends to be. The majority of the scenes were actually filmed in Sweden's second-largest city. Many of the interiors can been found in Haga, the neighbourhood described above. Other scenes of this post-war drama have been shot at, for example, the university library built in 1900, on Vasagatan, in the former working-class quarters of Majorna, in the castle of Nääs, in Änggården next to the Botanical gardens, at Hôtel Eggers opposite the central train station, and in many other hidden and less-hidden corners of Gothenburg.

If, again, you are looking for more suspense, give the Johan Falk films a try. The fictitious policeman can be seen chasing criminals through the city's streets, having a shootout in the shopping mall Nordstan and getting a nightcap in bar Notch on Viktoriagatan. Sounds of the city

As most concerts and other large events have been cancelled, venues and artists have come up with ways to transport music, operas, dance and theatre to your living room. Gothenburg's concert hall, for example, is live-streaming its performances, providing digital visitors with a broad selection of classical and modern pieces by, for example, the Gothenburg Symphony Orchestra.

Another not-to-miss sound is the voice of, arguably, Gothenburg's most famous singer-songwriter Håkan Hellström, who, through his songs, takes you through both his life and the city. Here you'll find a list of recommended tunes, in Swedish.

But, with Gothenburg's reputation of being one of the greenest cities in the world, with inhabitants having easy access to large parks, forests, lakes, the northern and southern archipelagos and wide ocean views, you might want to transport yourself to the country's west coast through a nature symphony.

YouTube and Spotify give access to ocean breaks and forest sounds, but if you want something more local and spring-like, try Fågelpodden, a night's worth of Swedish bird song as heard throughout Sweden, featuring robins, blackbirds and many other native and migrating species.

Night in the museum

Most museums in Gothenburg are still open to the public, which also means that not all of them have chosen to move their exhibitions online. Having said that: some actually did so anyway, enabling you to digitally wander these museums day and night from the comfort of your home.

A good example is Göteborgs Konstmuseum, which has digitalised some of its wonderful temporary and permanent exhibitions. Experience, for example, the contemporary '148 Works' by the Dane Trine Søndergaard. If you'd rather export yourself to the Renaissance and Baroque era, digitally visit Tryckt, an exhibition presenting prints from masters like Albrecht Dürer, Rembrandt van Rijn and Marcantonio Raimondi.

The adjacent Hasselblad Center even has digital guided tours of its new (contemporary art) exhibition, Feast for the eyes.