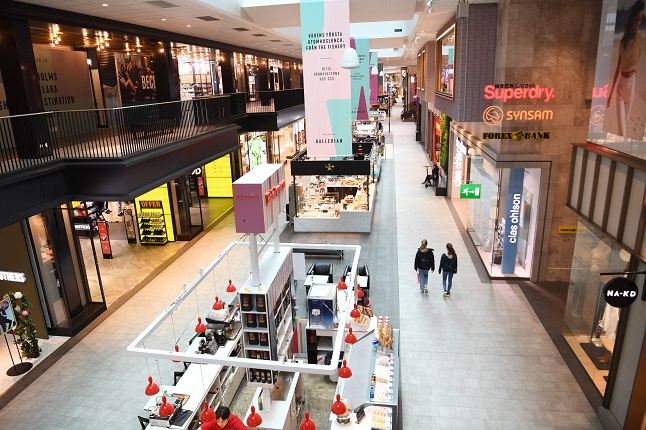 There may be no lockdown, but many Swedish consumers are choosing to stay home. Photo: Fredrik Sandberg/TT

The Swedish strategy has been driven by the Public Health Agency, which has no role in economic policy, so protecting the economy has not been a stated aim of the looser measures. However, Prime Minister Stefan Löfven has repeatedly pointed to the fact that the more relaxed framework is sustainable for a longer time – so could it help businesses weather the storm?

Keeping businesses open could increase the chance of survival for some companies, but industry experts The Local spoke to warned that the impact of the virus is still significant.

“The hardest hit [retail sector] is clothing, shoes and sporting goods. Half of the stores have lost at least 40 percent of their sales, one in ten stores have lost 80 percent,” Hans Tjernström Carraro from the Swedish Trade Federation told The Local.

“Stores have continued to be open, which of course has been important for Swedish trade. On the other hand, we see that quarantine, reduced travel, cancelled events and reduced movement in society have had a very strong impact on trade. The big cities have been hit hardest. E-commerce has increased but not fully compensated for the total loss of sales. Consumers also increase their savings when economic times are uncertain and unemployment rises,” he explained.

He said that state aid for retailers would be essential for their survival, including support for the two biggest costs – staff and rents. The government has offered support to cover business rent costs, as well as covering the cost of sick pay, topping up salaries of staff whose working hours are reduced due to the virus, and introducing a furlough scheme.

Tjernström Carraro said that the rental subsidies had not reached a sufficient number of businesses, however, as the scheme requires property owners to first lower rent, something many of the federation's members have said hasn't happened. He added that some other measures, including support for businesses that have had to adapt due to loss of turnover, are coming late, only set to be implemented from July 1st.

An analysis of card transaction from Swedbank showed that several industries in Sweden had not lost as much in turnover compared to countries with lockdowns.

But Andreas Wallström, the bank's chief economist, warned: “Sweden will not have any tangible benefits ahead of the other Nordic countries. Swedish exports are affected when world trade falls. In addition, the government's crisis measures have come late and with less generous conditions than in several neighboring countries, despite strong public finances.”

Christina Nyman, chief economist at Handelsbanken, said that the widespread use of the schemes the government has set up to help businesses was proof that Sweden's economy has not been spared.

“On the labour market, furloughing of staff has been heavily used, with almost half a million people. If you add in people who have been notified of layoffs or were already unemployed, it's around one million and the total workforce is normally four million. We expect unemployment to increase largely,” she told The Local.

“It's too early to say whether we will do better or worse economically in the long term, but I think we would have done worse if we had had a total lockdown. Tourism, travel, restaurants and events are all hit, the service and retail sectors might do better because we aren't locked down, but we still have social distancing and uncertainty so they have been hit,” she explained. Not only have changing consumer behaviour affected domestic sales, but as a small and open economy, Sweden is dependent on international trade, particularly in its manufacturing sector.

Nyman said that this means Sweden is usually more severely hit by global financial crises, along with other small export-driven economies.

Compared to the other Nordic countries, Sweden is likely to see a smaller fall in GDP this year, but also a smaller increase next year. Economists at Swedish bank SEB estimate Sweden's GDP will drop 6.5 percent this year, a little better than Norway (7.4) and ahead of a 10 percent fall in Denmark. But while Norway and Denmark are predicted to see a GDP increase of 5.2 and 9 percent in 2021, SEB's prediction for Sweden is a 5 percent rise.

“There is no winner in this crisis. Sweden is a small and open country, and we depend on international trade and investment,” Andreas Hatzigeorgiou, CEO at Stockholm Chamber of Commerce, told The Local. “We can only do so much to mitigate the economic shock of the corona pandemic.”

He added: “But, compared to other small and trade dependent countries, it is not unlikely that Sweden might get out of the crisis in a relatively better position. What the Swedish case clearly demonstrates is how interdependent economies and companies are in today's modern economy. I think there will be no substantial recovery from the crisis unless there is also a substantial reboot of globalisation and free trade.”