In Denmark, several opposition parties have called for the border to be reopened to Germany and Norway, but not Sweden. And in Norway, it's possible that when the border reopens on June 15th, it will remain closed to travellers from Sweden.

Denmark and Norway are now easing their lockdowns so that the situation looks more similar to Sweden, with schools, shops and restaurants all reopening. But a big difference is that the lockdown allowed the governments in these countries to limit the spread of the virus at an early stage, while they developed extensive testing and contact tracing capacity.

“Our hope is that we now will now rather be having small bumps of waves that we can knock down again by very active testing and contact tracing and isolation, which is the hope for the rest of the year, until we have a cure or vaccine,” Norway's state epidemiologist Frode Forland told The Local Norway.

Forland has told Swedish radio that the high spread of infection in Sweden is a cause for concern as the country plans when and how to reopen its border.

Similar messages have come from Finland, where interior Minister Maria Ohisalo said at a Nordic-wide meeting that a 'travel bubble' between the countries could be difficult.

“Norway, Denmark and Iceland have succeeded in stabilising the situation. In Sweden the situation is more worrying,” she said, also suggesting that Finland might put different policies in place for its borders to Estonia and Sweden depending on the situations in each country.

Mika Salminen, director of Finland's Department for Health Security, said that tourists from Denmark and Norway may be less of a risk than those of Sweden.

“That's sad. It is a political decision [how to reopen borders], but the difference in the spread of infection is a fact, and I assume the government, of course, takes that into account,” he said.

Sweden has had a significantly higher death toll from the coronavirus than its neighbours, as of May 21st having reported more deaths with the virus than the other Nordic countries combined.

Salminen and Forland's Swedish counterpart Anders Tegnell has claimed that the fact Sweden is further along in the infection curve could actually make citizens a safer bet, telling TT: “When we get to summer, it might be the case that we have so many people in Sweden who are immune [to the coronavirus] that it could be safer for Swedes to go there than others.”

This is based on the assumption that exposure to the coronavirus grants immunity against re-infection, something the World Health Organisation has warned is not a certainty.

Several studies have suggested that people who have been infected do have some antibodies that according to the WHO would likely “provide some level of protection” against re-infection. But there is still no evidence to show whether people are fully immune, or for how long. The first studies on antibodies in Sweden showed that around 7.3 percent of Stockholmers had developed antibodies to the coronavirus by the end of April, suggesting that this percentage had been infected in early April — it takes a few weeks to develop antibodies.

That compares to around one percent in a similar study of the Danish population, but it still suggests that Stockholm, the hardest hit city in Sweden, could be some way off the predictions of reaching 26 percent immunity by the start of May.

Tegnell also argued that foreign visitors have not been key drivers of infection in the Nordics in the coronavirus outbreak. It was not visiting Italians, French, or Chinese people who brought the virus to Scandinavia, but rather native residents who themselves travelled abroad and brought back the infection.

“So if they're doing something based on that experience, it should be preventing their own residents from travelling to Sweden,” he said.

But in addition to a higher level of infection in Sweden, the country also has a lower level of testing and tracing than its Nordic neighbours.

People with mild symptoms can currently not get tested unless they fall into certain high priority categories such as medical or care workers, and there is no official contact tracing app such as the one used in Norway.

This means that even if a higher proportion of Swedish residents are immune to the virus by summer, it could be hard to identify who has and hasn't developed any immunity, unless contact tracing and testing are amped up significantly.

MORE ON THE CORONAVIRUS IN SWEDEN: 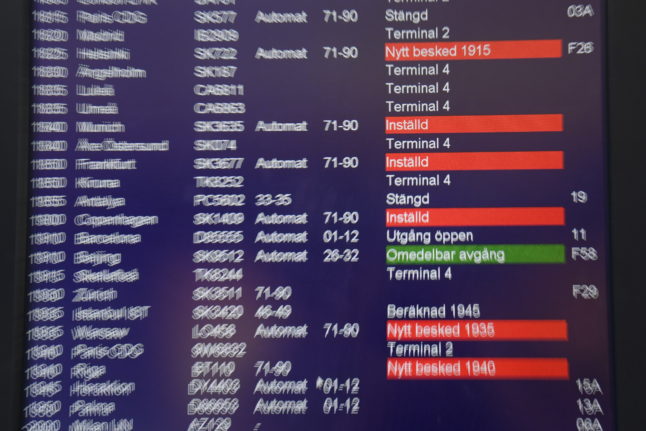