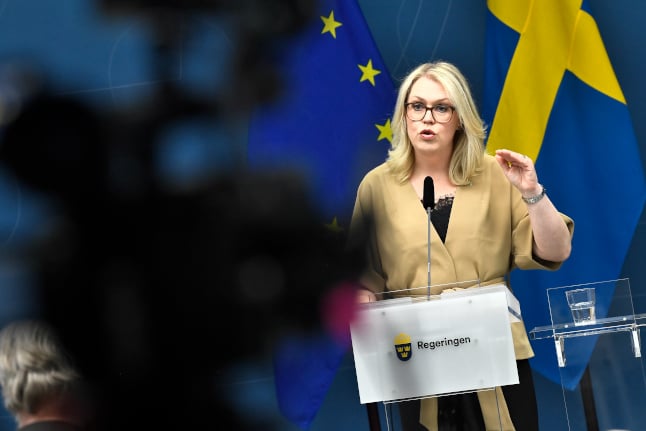 There are many reasons why Sweden has not had an enforced lockdown as seen in many other European countries, despite a higher death toll than its Nordic neighbours. Some of these include a belief that voluntary measures are easier to keep in place longer, the fact that the strategy is set out by the Public Health Agency rather than the government, and legal obstacles that mean a nationwide curfew would be near-impossible.

But when asked by The Local whether the country ever reached a point when Health Minister Lena Hallengren wished she had been able to impose a full lockdown, the Social Democrat answered no.

“I can honestly say I would not have wanted a lockdown. I never wished for one, I only wished that the Swedish people would follow our recommendations. My impression is that they have done so,” she said.

Sweden's coronavirus restrictions include a ban on public events of more than 50 people, barring visits to care homes, and anti-crowding rules for restaurants, but also a series of recommendations urging people to work from home if possible, avoid non-essential travel, and keep a distance to one another in public spaces.

Mobile data back up claims that life is far from normal in Sweden – albeit slightly more normal than in many other countries – with Telia mobile data reporting a reduction in long-distance travel of up to 96 percent over the Easter holiday. While recent data indicate a slight upturn in travel, it's still below levels in other years. Eighty-four percent of respondents told a Civil Contigencies Agency survey of Swedes' behaviour during the coronavirus crisis that they had been keeping a greater distance to other people in late April and May.

At the same time, several pictures of crowded outdoor restaurants have been shared in media, and Swedish health authorities have even had to step in to close down restaurants for flouting social distancing rules.

“I don't think there is anyone really who ignores the recommendations all the time, but you are right that there are probably those who think 'oh, I broke a rule now, I sat too close to someone at an outdoor restaurant, and I perhaps even accidentally hugged someone I perhaps should not have hugged',” said Hallengren.

“But the vast majority have changed their behaviour, otherwise Sweden wouldn't be this empty. I think people are growing used to the new normal, and we almost can't remember how busy it was a few months ago.”

“I think it will be interesting when lockdown is looked into further. People have to go to work, how would healthcare work, grocery stores, how would pharmacies be able to stay open, how would waste collection work, police, fire and rescue services, if we for example had to close schools? I have not had any statistics so far that show keeping schools open would have contributed to the spread of infection,” added Hallengren.

Sweden is not alone in defending its decision not to close schools for under-16s. When reopening schools, Norway's Public Health Institute used the experience of Sweden, along with Iceland, Taiwan and Singapore – where no clusters of the virus were linked to schools – as an example when it explained its own reasoning. Stockholm's Old Town just before noon on May 11th. This street is normally full of tourists. Photo: Johan Nilsson/TT

It is tempting to paint the entire country with the same brush, but the situation is complex and variations can be seen within Sweden, too. Stockholm has for example been hit much harder than the city of Malmö, and immigrant communities in some of Stockholm's vulnerable suburbs were particularly affected at the start of the outbreak, which Sweden's deputy prime minister addressed in an interview with The Local last month.

“Nobody can say anything other than that it is a society-wide failure that the infection entered the homes of the elderly and that we had in fact not equipped elderly care to cope with this situation, given of course that no one has really been able to figure out how to prevent this from ever happening,” said Hallengren.

Sweden is not the only country where care homes have seen devastating levels of infection spread. Residents of elderly care homes have accounted for a large proportion of fatalities in countries like France and Spain where the infection arrived earlier and total deaths have been much higher than in Sweden, as well as in Denmark and Norway which have otherwise seen significantly lower death rates than Sweden.

No common explanation for how the infection got into care homes in Sweden has been agreed on. Some reasons that have been mentioned include new arrivals to the homes, residents returning from hospital stays, not enough face masks, asymptomatic staff, not enough testing of care home staff early on, and a large number of hourly employees who may not be able to stay home from work without risking losing their salary.

“I think both myself and my party have been talking for a very long time about labour rights, the right to secure employment and resources to the welfare system, but this makes it very clear,” said Hallengren. The question of responsibility will likely be hashed out in months to come. Sweden's strategy involves several actors, including the centre-left coalition government, national health authorities, regional healthcare administrations which are governed by a range of different parties across the political spectrum, and around 1,700 elderly care homes across the country which are run either by local authorities or private companies.

Swedish opposition politicians have been remarkably supportive of the strategy, but there are signs that the time of rallying behind the government is slowly coming to an end. On Friday law-makers in the Swedish parliament are set to debate the country's measures to curb the spread in elderly care homes, a debate requested by the Left Party and the Sweden Democrats – normally each other's opposites in parliament.

“I can't say that the government assumes all responsibility. That would be unreasonable when there are thousands of care homes and hundreds of actors. The main responsibility rests with the employers to make sure that their employees have the education they need to do their jobs, that they have the equipment they need to feel safe and be safe,” said Hallengren.

“But as a society we need to get better at helping each other. And when we are in a situation where we are able to prioritise welfare and elderly care, we can't constantly keep putting other things first. I hope we can agree on that even after this crisis.”

Some steps to improve the situation have been taken.

Sweden's healthcare watchdog is set to inspect all care homes in June, and the government has presented a plan to inject billions of kronor in elderly care this year. More staff in care homes are being tested for the virus, although Sweden is still far below its national testing target. The number of infections and deaths in care homes have fallen in Sweden in recent weeks.

“I don't want to draw final conclusions because we are perhaps still only at the end of the beginning, which means that those parts of the country that do not yet have widespread outbreaks could prepare and could have greater success in protecting the elderly,” said Hallengren. “It does not have to be the end result.”