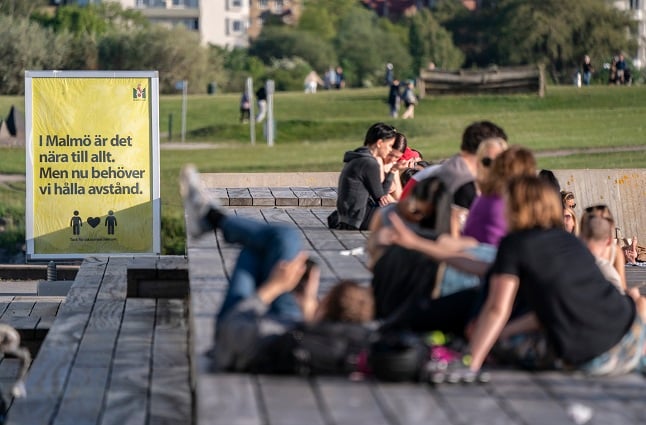 People relax in a Malmö park on Tuesday evening, by a sign reminding them to keep distance from others. Photo: Johan Nilsson / TT

So far, Skåne has been praised for its managing of the outbreak. Significantly fewer deaths have been recorded (157 compared to 1,971 in Stockholm and 477 in Västra Götaland, according to the Public Health Agency's figures from May 26th) and a smaller proportion of elderly care homes have reported the infection.

Figures from Region Skåne show a small difference to those from the Public Health Agency due to the two authorities collecting the data at different times of the day, although they use the same sources. On Wednesday morning the region reported 169 deaths of people with confirmed coronavirus in the region since the start of the outbreak. Around half (83) of those deaths took place outside hospital.

In the week ending May 24th, 1,960 people were tested for coronavirus in Skåne, of which 1,136 were either patients in need of hospital care for their symptoms or residents of care homes, and the remaining 824 were healthcare workers. That was an increase from 1,673 tests the week before.

A total of 240 people tested positive for the virus, with positive tests split almost exactly equally between those two categories.

Since the start of the outbreak, Skåne has confirmed a total of 1,583 coronavirus cases, with more reported in the 80-89 age group than any other.

This number includes all confirmed cases since the start of March, including those who have since recovered or passed away. And it's far from the real number of confirmed cases, because not everyone with symptoms can get tested in Sweden and the majority of those who catch it will be able to recover at home.

In the table below you can see how many cases of the virus have been reported in each of Skåne's municipalities as of May 27th. Regional capital Malmö has been hardest hit with 357 known cases, followed by Helsingborg with 223 and Lund with 75 known cases. No other municipality reported more than 37 confirmed cases.

Only cases confirmed after March 15th are included in the table above, due to a change in testing which means figures before and after that date are not comparable.

Up until March 14th, people who had visited areas which at that time were considered high-risk for coronavirus, or who had had contact with confirmed coronavirus cases, were tested if they showed symptoms consistent with the virus.

From March 15th, the testing strategy was changed to focus on people who need hospital care or who live in elderly care homes and showed symptoms of the virus. By April 15th, around 5,500 coronavirus tests were carried out in Skåne.

More on the coronavirus in Sweden: