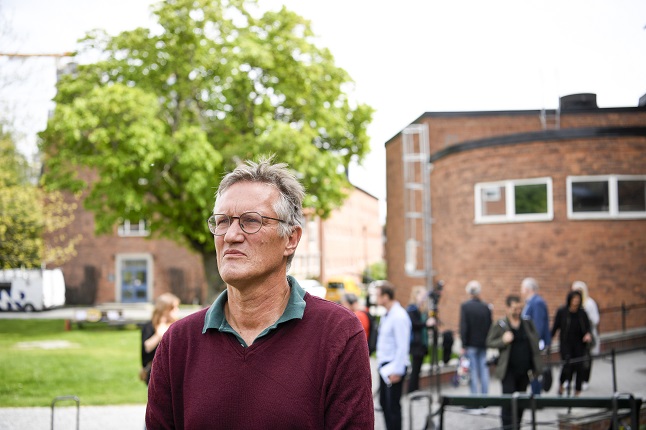 Swedish state epidemiologist Anders Tegnell has defended the country's coronavirus strategy, which has not included a lockdown. Photo: Pontus Lundahl/TT

Italian ambassador Mario Cospito stated his country's healthcare system was “unanimously considered among the best in the world” and that those working in it deserved “respect and admiration […] in Italy and abroad” in his response to a radio interview with Tegnell.

The state epidemiologist told Sveriges Radio: “We had really thought that in a modern, wealthy society in Sweden we should be able to protect our elderly. [We thought that] it didn't need to be as it appeared in China, and perhaps even Italy, where they have less resources for this, but that we should as a society be able to manage this better.”

The interview did not give further details about where Tegnell believed Italy had fewer resources than Sweden, with the next question in the published version referring to Tegnell's hobby gardening. The Local has contacted the Public Health Agency for clarification on any difference in resources.

In the World Health Organisation's ranking of international healthcare systems, Italy was judged the second best in the world, with Sweden ranked 23rd, as the statement from Italy's ambassador noted.

Ambassador Mario Cospito also pointed out that Italy has 5,000 intensive care beds (in a population of 60 million), with capacity to create “thousands more” if needed. Sweden currently has around 1,000 intensive care beds, a figure which has doubled since the start of the coronavirus outbreak, and has maintained 20-30 percent available capacity in ICUs across the whole country.

Swedish healthcare staff have however warned of unclear guidelines and that some patients needing intensive care are not receiving it despite there still being several hospital beds available in the region, prompting an investigation by the country's healthcare watchdog.

“The challenge of Covid-19 is not a football game, nor are there opposing fans in the stands who hope for the victory of their team: it is a common and generational challenge to guarantee everyone's health,” the statement from Italy's ambassador reminded.

“No cases have been shown where care has been denied to the infected or the seriously ill. In addition, in Italy, there is a comprehensive structure of private hospitals and clinics ready to move in to offer support to the national healthcare system.”

It also noted that “no one has so far questioned the Italian national health care system in the fight against Covid-19”, citing support from the WHO, European Union, and European Centre for Disease Control.

Elderly care facilities have been badly hit by the virus in both countries, and elsewhere in the world. In Italy, most care home deaths are not included in the official death tolls, and police have reported cases of neglect, lack of cleanliness, and “suspicious deaths” in care homes across the country.

In Sweden, the healthcare watchdog on Wednesday said one in ten of the more than 1,000 care homes it had audited showed signs of “serious problems”, including linked to hygiene or staff continuing to work despite suspected infection, while there have also been reports of elderly people not being offered oxygen treatment and intensive care.

Sweden's death tolls include deaths outside hospitals and in care homes but only where the patient tested positive for the virus before death; the country's per capita testing rate is one of the lowest in Europe but care home residents are in the top priority group for testing.