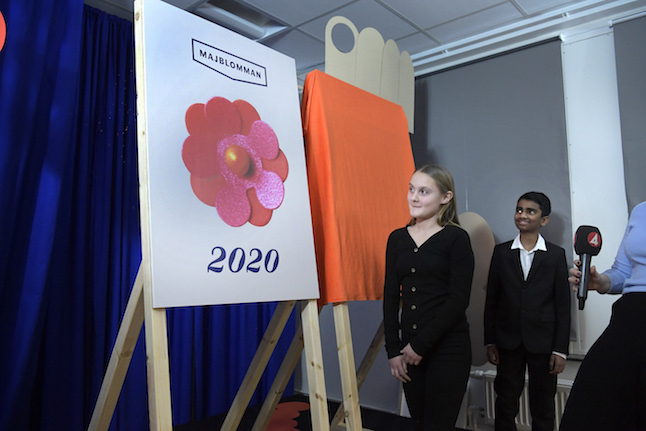 The presentation of Majblomman 2020, a campaign to support children growing up in poverty. Photo: Janerik Henriksson/TT

May is usually the month of Majblomman – 'May flowers' that are sold by children in the streets and where the proceeds are used to support children in Sweden who are growing up in poverty.

But this spring is the first in over a hundred springs that no physical Majblomma has been sold, due to the risk of spreading the coronavirus. People wanting to support Majblomman's cause have instead been encouraged to buy digital flowers through its website, but organisers fear dropping numbers of sales, and, hence, a smaller amount to divide among these families in need.

The organisation expects to raise around 10 million kronor (approximately $1 million), which is far less than a normal year. Last year, children sold May flowers worth 67 million kronor.

It raises the question: how widespread is child poverty in Sweden, and is the vulnerability of families already at risk of falling below the poverty line aggravated by the coronavirus crisis?

According to the latest available data from Statistics Sweden, around 10 percent – around 186,000 in total – of all children in Sweden live in poverty. Child poverty in Sweden doesn't necessarily translate to hunger or homelessness. In practice, it means that what a family has to subsist on isn't sufficient to pay all necessary living expenses, which could include food, but more often the cost of electricity, telephone bills, clothes and public transportation. The Swedish Public Health Agency applies a different definition to measure economic hardship among families with children. According to the agency, around 19 percent of children in Sweden live in an “economically vulnerable position” or in a family with a so-called low-income standard. This low-income standard is, by the EU's relative poverty definition, described as “earning 60 percent or less of the median (Swedish) income”.

Children of single parents – the majority of which are mothers – children of people with a low level of education and children born outside Sweden are all at a greater risk of falling below the poverty line.

And even though the general economic standard has improved in Sweden over the last couple of decades, the number of children growing up in economic vulnerability has been increasing since the 1990s. Thus, while many families with children have had it easier financially since the start of the 2000s, the share of families living with a low-income standard has simultaneously surged, too.

“Poverty hasn't been on the rise, per se,” Tove Samzelius, child poverty expert at Rädda Barnen, the Swedish branche of Save the children, told The Local. “But income inequality has increased. The lowest percentiles have had their incomes basically frozen, while the rest of the population has seen their incomes rise.”

Social security benefits, Samzelius said, have not been raised at the same rate as the cost of living. This means that, in real terms, families dependent on allowances have less to subsist on than they used to. At times, in fact, their benefits prove insufficient to cover all basic living expenses.

Most likely yes, Samzelius said, although this assumption is at this time impossible to corroborate by figures. “These types of statistics about children and child poverty lag behind with about a year and a half. That's simply how much time it takes to gather and interpret all the relevant data.”

Having said that: the fact that many people have lost their livelihood during the current crisis, especially those who were already in a vulnerable position by being employed part-time or on a call-in basis, suggests that many lower-income households may now be toiling to make ends meet. “We received some reports about the number of social assistance requests, but even these figures fail to tell the entire story. Many people simply don't qualify for these type of benefits and pretty much fall between the cracks.”

But judging from what Rädda Barnen hears from people on the ground in vulnerable neighborhoods, it seems that, indeed, more and more families are struggling. “That is also why we started handing out food, together with some other partners. This is not something Rädda Barnen usually does; generally speaking it's the church and Stadsmissionen (the city mission) who take care of this. But we find ourselves in an unusual situation which calls for unusual measures.” “People live as lodgers, share flats or rent rooms. Among those are many families with children. One can only assume that, during a pandemic, people are likely asked to leave these temporary homes. There is also a lot of distress in hostels, where families are sharing facilities with others. In any normal situation people staying in these hostels are already at a risk of contracting and spreading diseases, but especially now.”

The kind of inequalities that our society already had, Samzelius said, now become even more accentuated.

“The organisations through which we are handing out food report a high demand and long queues. Whether it's families who only recently fell on economic hardships or not, we cannot really say. But for a long time now there has been an underbelly in Sweden of families that are always struggling.”