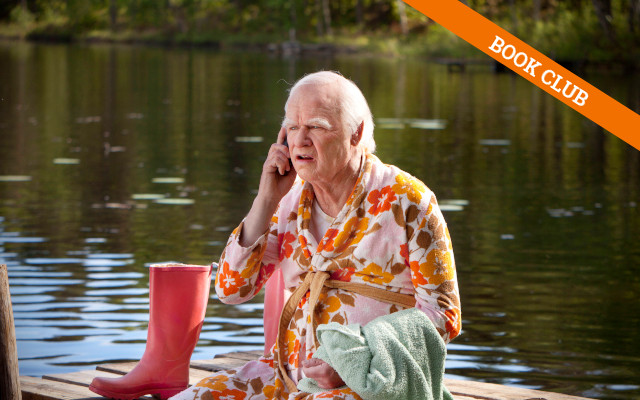 The book starts with hero Allan escaping through the window of his care home on his 100th birthday, unable to think of anything worse than the party that's planned for him.

The topic of care homes is pertinent in Sweden right now, as around a half of all the country's deaths with the coronavirus have sadly taken place in these institutions, something the Health Minister told The Local was a “society-wide failure”.

Three of the books we've read in this Book Club have portrayed failures in care homes, from the managers only interested in turning a profit in The Little Old Lady Who Broke All the Rules to the ever-changing, always rushed home carers who looked after Doris in The Red Address Book, although the latter book also showed some carers who went the extra mile.

In The 100-Year-Old Man Who Climbed Out the Window and Disappeared, author Jonas Jonasson addresses other serious issues, not least when we find out than Allan was one of many victims of sterilisation programmes in Sweden.

Allan himself takes all the upsetting, exciting and downright bizarre things that happen to him in his stride, apparently shaped to some extent by his mum telling him at a young age: “Things are what they are, and whatever will be, will be.” We are repeatedly told he has “no opinion whatsoever”, as he saves General Franco, helps President Harry Truman invent the atom bomb, and befriends the brother of Albert Einstein, among other adventures.

But by showing how this unlikely hero changes the course of world events, Jonasson is sending the reader the opposite message. We can all make an impact, and it's never too late.

Like Doris in The Red Address Book, Allan has a frank view about death, telling his adversaries: “If you want to kill me, you'd better hurry, because I'm 100 years old.” There's certainly a Swedish pragmatism in that attitude, summed up near the start of the novel when he decides he will have to get around to dying some other time.

Here's what else Book Club members had to say about the book:

“I really enjoyed this book. Of all the books we have read so far, this book seemed the most Swedish to me. The humour is what seems Swedish to me. The emphasis on calmly engaging in rigid daily routines amongst chaos is funny. The repeating of jokes may seem old and boring to some people, but I find it funny beating up on a joke. It is like adhering to a rigid routine and welcoming the certainty.

“The friendships in this book are nice because each character’s eccentricities are just matter of fact accepted. I like the way all the great adventures are received with deadpan acceptance. I like that kind of humour which I am familiar with through my Swedish American heritage.” – Suzette Ehrlich

“I found it in the same style as Forest Gump. A look at history through the guise of a single person. Allowing us to see the events both in context and from the first person perspective.” – Diane Reynolds

What to read next: If you enjoyed the surreal comedy and following an elderly protagonist, our previous Book Club pick The Little Old Lady Who Broke All the Rules could be a good fit. Alternatively, try the award-winning The Unlikely Pilgrimage of Harold Fry by Rachel Joyce, which is overall a quieter, more serious read. In this book, 65-year-old Harold sets out on an 87-day walk to visit an old friend who is seriously ill.

If you'd like to share your thoughts on The Hundred-Year-Old Man Who Climbed Out the Window and Disappeared, or any ideas on what we should read next or other suggestions for the Book Club, join The Local Sweden's Book Club on Facebook, or send us an email.