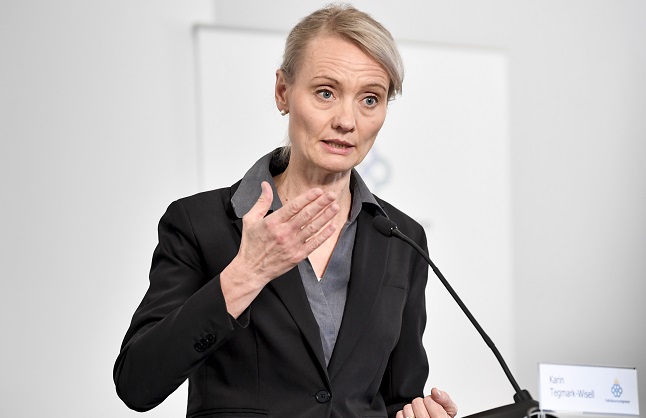 The analysis was based on antibody tests carried out on people who sought primary care for other kinds of diagnoses.

“These are people who come to primary care for other diagnoses than Covid-19, who have some kind of illness or symptom for which they need to take tests,” noted Karin Tegmark Wisell, head of the Public Health Agency's department for microbiology.

She said that usually this group was representative of the overall population for analyses used for other vaccination programmes, but that the trends for seeking medical care were “significantly changed” during the coronavirus outbreak, so the group could not be considered truly representative.

Among adults aged 20-64, around seven percent had antibodies for the coronavirus, but there were large differences between regions. The levels of antibodies were higher in the Stockholm region than in Västra Götaland and Skåne.

Many of those in the group of 0-19 years were children who were being tested for allergies, who were not seriously ill and continued to participate actively in society. Antibody production increased in this group over time, and by late May the percentage was higher than among the 20-64 age group.

The figure among elderly people over 65 was much lower (around 3 percent) and saw less of an increase to a lesser extent over time. Tegmark Wisell said this was expected, due to the fact over-70s have been asked to completely avoid social contacts so are less likely to catch the virus.

The Public Health Agency has also collected samples from blood donors to analyse antibodies, and should publish the results of these studies next week, with a more general report on antibody tests so far. From May 8th, the agency has advised that tests should be carried out even on people who do not require hospitalisation for their symptoms, and from mid-April testing has increased among healthcare and elderly care home workers too.

She explained that different testing strategies were used at different points in the pandemic. In the early stages, the focus is on stopping infection and finding all those who are sick, like when at the start of the pandemic there was contact tracing of people who tested positive for the virus. These tests did not track down all those who were sick, possibly because the virus was new and little was known about it.

Most of the early coronavirus cases in Sweden were brought by people returning from overseas travel, but state epidemiologist Anders Tegnell has said that the majority came from countries that weren't at the time considered high risk.

“In a pandemic phase, which Stockholm reached in March, this type of testing wouldn't work. It's not possible to test millions of people, so instead it was important that those with symptoms isolated themselves. As more and more regions go into a phase where the rate of illness reduces, it's important to return to stopping the spread of infection and carrying out contact tracing,” Tegmark Wisell explained.

But that didn't mean the agency was satisfied with the current rates of testing. She said: “We are pushing for broader testing, testing within primary care when there is a medical indication for testing.”

The total number of people tested for the virus increased last week but remains well below the government's goal of 100,000 weekly tests, partly due to logistical problems in carrying out the tests, which must be done within 72 hours of first symptoms to be effective.

Sweden had reported 4,468 deaths linked to the coronavirus by Tuesday, meaning that when measuring deaths per capita it is one of the worst hit nations worldwide, though there are differences in how countries report deaths.