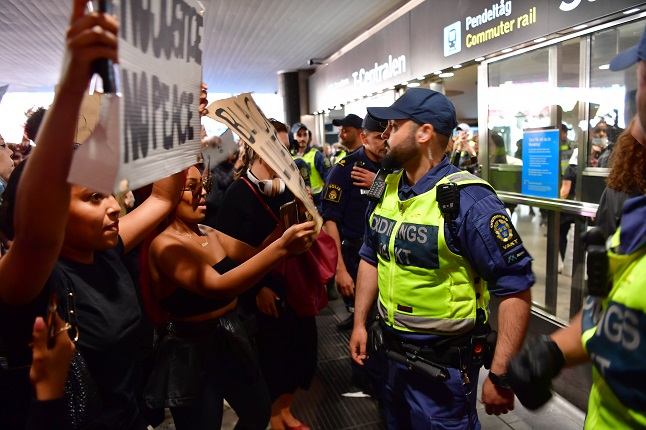 The organisers had initially received permission for the event between 6pm and 8pm, but this was withdrawn after hundreds of people turned up to protest. The crowds later grew to thousands, around 8,000 according to organisers.

The demonstration was held in response to the killing of black American George Floyd by a police officer, an event which has sparked protests against racism and police violence in all 50 US states and countries across the world.

Police press spokesperson Mats Eriksson told TT that two person had been arrested for violent riot, but he was not aware of any reported injuries. He added that the actual protest at Sergels Torg had been calm.

Police press spokesperson Ola Österling told TT: “This was in order to preserve peace. I have no information about pepper spray being used elsewhere. But I don't have full confirmation on what happened elsewhere in Stockholm.”

The Local has contacted Stockholm police for further comment but had not been able to reach Eriksson at the time of publication. Another press spokesperson was unable to comment due to not being fully updated on the situation. There is currently a ban on public gatherings of over 50 people due to the risk of infection of the coronavirus.

Eriksson told the TT newswire that before 6pm, the number of participants was already over 50. Police at around 5.30 began using drones to carry out surveillance of the area, according to their website.

Eriksson said that the organisers of the protest then asked protesters to leave Sergels Torg, a large square by the city's central train station, due to the restrictions in place because of the coronavirus.

Explaining the decision for giving the permit to an event that was likely to attract such large crowds, he said: “It's up to the organiser to ensure there aren't more [than 50 people]. For a long time before, they were asking people to leave Sergels Torg. But that wasn't obeyed. Then a decision was made [by police] to break up the event, due to the restrictions we currently have on public gatherings.”

Many of the protesters moved away from the square and marched through other parts of the city centre in smaller groups.

“We are here to support the Black Lives Matter movement. It feels really good to see everyone who has gathered here,” one of the protesters, Ronncie Anuforch, told the TT newswire.

“We have to show love to the people who care. No more killing of innocent people,” said Faizal Sekatawa.

On Tuesday, over 40,000 people took part in an online protest against racism, organised by Aysha Jones together with the organisation Stop Afrophobia, Afro-Swedes Forum for Justice and the Afro-Swedes Association.

Protests began in the United States last week, after George Floyd lost his life in Minneapolis police custody. Since then, demonstrations in several US cities have turned into violence with cars and buildings set alight and riot police using tear gas and rubber bullets – including on apparently peaceful protesters and journalists.

Were you at the protests, and do you want to share your photos or experience? You can always get in touch with The Local if you would like us to help tell your story.