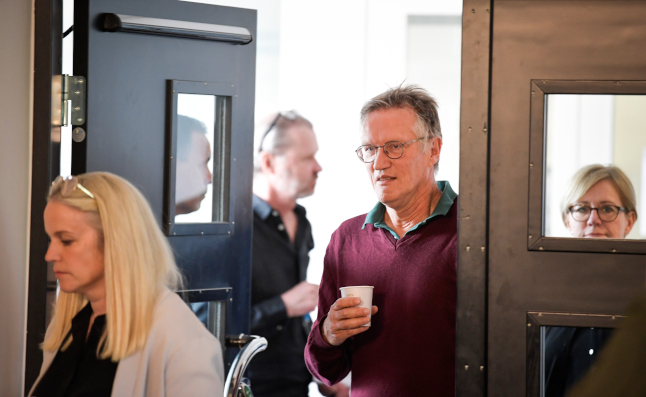 State epidemiologist Anders Tegnell is one of the people involved in Sweden's strategy. Photo: Pontus Lundahl/TT

“If we were to encounter the same disease again, knowing exactly what we know about it today, I think we would settle on doing something in between what Sweden did and what the rest of the world has done,” Tegnell, one of the most well-known faces behind the Public Health Agency's strategy, told radio show Ekot on Wednesday morning.

One of his Norwegian counterparts, Frode Forland, specialist director of infectious diseases and global health at the Norwegian Institute of Public Health, last month accused Sweden of having been too wedded to plans it put in place long before the pandemic broke out, and failed to adapt to new information as it came in.

Throughout the pandemic, Sweden has adopted a more lenient approach than many of its European neighbours: banning public events of more than 50 people, barring visits to elderly care homes and closing universities and schools for over-16s, but also relying on voluntary measures to curb the spread of the virus.

These measures, which are not enforced but people are expected to follow, have included asking over-70s and other risk groups to avoid direct social contact, and urging other people to wash their hands regularly, avoid unnecessary travel and practice social distancing – the latter of which it only introduced in late March.

The measures have had some kind of effect – the seasonal flu season is believed to have ended early because of them, and the coronavirus infection curve appears to be bending – but they have not prevented the deaths of more than 4,400 people, a number far higher than Sweden's Nordic neighbours which all introduced stricter rules.

Despite a stated goal to protect the elderly population, the virus swept through Sweden's elderly care homes at an alarmingly fast pace. Around half of all over-70s who died from the virus lived in a care home, and around a quarter were receiving home care, according to the National Board of Health and Welfare.

Tegnell and his colleagues at the Public Health Agency have consistently argued that their strategy – introducing measures step by step and informing people to convince them to follow the advice voluntarily – may be more sustainable in the long run than a full lockdown. But Tegnell said too many had lost their life.

“I think there is clearly room for improvement for what we have done in Sweden. It would be good to know exactly what to shut down to curb the spread of infection better,” Tegnell told Ekot. “In the future we have to think about if there had been a way of stopping [the number of deaths].”

But Tegnell said it was still not clear what Sweden should have done differently, whether it should have introduced different measures or introduced them all at the same time rather than in incremental steps.

“In fact, all countries really have thrown everything at it at once. Sweden is one of the few countries and has worked its way up to a stop more and more. All other countries started with a lot of things at once, and the problem with that is that you don't really know which of the measures you took had the best effect,” he said.

“Maybe we will get to know that now when you start removing measures one by one, and perhaps that will teach us some kind of lesson about what else, besides what we did, you could do without a full lockdown.”

Tegnell's comments quickly grabbed headlines both in Sweden and in international media. But he told the Public Health Agency's daily press conference at 2pm on Wednesday that they should not be interpreted as a rejection of the entire strategy. He said that with the benefit of hindsight there are always things that can be improved, but that he and his team would nevertheless not drastically have changed the strategy.

“We still think that the strategy is good, but you can always make improvements, especially when looking back. I personally think it would be rather strange if anyone answered anything else to such a question. You can always do things better,” he said, adding that he did not necessarily think he had been misquoted, but that his comments had been overinterpreted.

Tegnell mentioned elderly care and a lack of testing capacity in the early stages of the pandemic as some of the areas that he believed Sweden could have tried to improve in retrospect – including Sweden's decision to close schools for over-16s, but he added that how effective that measure was was still being evaluated.

Sweden's leaders have repeatedly stressed that the measures are designed for the long haul, that the fight against the virus is a “marathon, not a sprint”.

But their approach has been criticised at home and abroad, particularly as the number of deaths has far exceeded those in neighbouring Nordic countries, which all imposed more restrictive containment measures.

Tegnell noted what he called an “ambivalent” view of Sweden abroad, with their approach receiving both praise and scorn.

“Sometimes it has been perceived as a bit of a threat, because it could indirectly cast doubt on some of the fairly drastic measures undertaken,” Tegnell said.

“There's no direct correlation between doing a lot and being cautious,” he argued.

“There's nothing to indicate that we would have had a totally different outcome if we had implemented more drastic measures.

“Britain did that but did not have a good outcome,” he said.