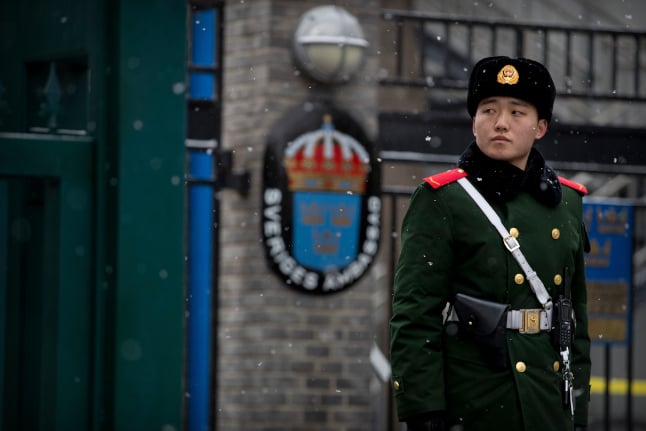 Anna Lindstedt is accused of brokering an unauthorised meeting during her time as ambassador to get publisher Gui Minhai freed.

Lindstedt – a veteran envoy who had previously represented Sweden in both Vietnam and Mexico, and acted as Sweden's chief negotiator at the 2015 climate summit in Paris – has denied the charges against her.

He served two years in prison, but a few months after his October 2017 release he was again arrested – while on a train to Beijing accompanied by Swedish diplomats.

In February of this year, a court in the Chinese city of Ningbo sentenced the publisher to 10 years in prison on charges of illegally providing intelligence abroad.

At the heart of the case against Lindstedt is a January 2019 meeting she helped organise between Gui Minhai's daughter, Angela Gui, and businessmen with ties to Beijing.

Angela Gui, who has been actively campaigning for her father's release, wrote in February 2019 on her blog about a “strange experience” where Lindstedt had invited her to Stockholm in January.

During discussions in the lounges of a hotel in the Swedish capital, in the presence of Lindstedt, she was introduced to the businessmen who claimed they could help secure her father's release.

In exchange, Angela Gui said she was told she “needed to be quiet” and to “stop all media engagement”, and she has later described the tone of the meeting as “threatening”.

Sweden's intelligence service launched an investigation after reports of the meeting emerged. The foreign ministry has meanwhile maintained that it had no prior knowledge of the meeting, saying Lindstedt acted of her own accord.

The ex-ambassador has refrained from making any public statements, but communicated through her lawyer that she denied the charges and welcomed an investigation.

A number of fellow diplomats have rallied to her defence.

In February, a group of 21 former ambassadors wrote an op-ed in newspaper Dagens Nyheter, criticising the ministry's decision to report Lindstedt to the police and arguing that she had acted well within her rights and role as an ambassador.

Lindstedt faces a maximum sentence of two years in prison for the crime of “arbitrariness during negotiations with a foreign power.”

The trial is set to run over a total of eight days in court ending on June 22nd, with one day being held in reserve.